The times they are a changing…

If you have been a regular reader of my various blogs over the years, I owe you an apology for having sort of disappeared. I haven’t actually disappeared, but I have mostly relocated my blogging efforts to Medium.

Because I wasn’t completely convinced that blog-readers over there would be interested in reading about things like the perils of duck-farming (and other such misadventures), I was a bit reluctant to move my entire blogging life from here to there. I don’t easily succumb to ‘grass is greener’ temptations, but in this case, recent changes to the way the Medium platform works have completely won me over.

One of the things I love about Medium (and, I’ll be writing a post all about that very soon) is that I can write about anything I choose – travel, art, food, farming, climbing, writing – and there’s an audience. Things aren’t organized in quite the same way as a traditional blog, so people find and follow the topics they are most interested in.

And, yes, the platform is set up as a subscription service so writers actually get paid for their writing efforts! You can read up to three stories a month free, but after that, it’s $5. a month to subscribe. I LOVE the platform and find that modest charge to be more than worth the modest investment AND I know that when I comment on or cheer for the writers I enjoy, they benefit directly. There are no ads on the platform, which is another huge plus to my way of thinking.

Anyway, all that to say, come find me over on Medium. I will try to remember to cross post over here more often than I have been, but if you don’t want to miss out, pop on over and say hello!

Look What the Cat Dragged In!

Perhaps the only thing cuter than a new lamb is a baby bunny – this one deposited at KN’s feet while we were down at the barn this morning. Bunny (dubbed Catnip by KN) was a tad shocked by the unexpected turn of events, but unharmed. It is recovering overnight in private quarters and will be released tomorrow. 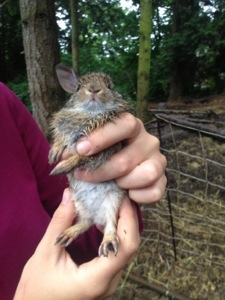 N is for Neverending Nights of Nothingness 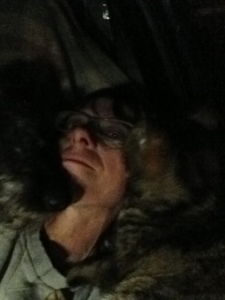 Nada. Nothing. Nobody. Nary a piglet in sight. Honestly, I am beginning to wonder what sort of mind games Olivia is playing with me! Last night as I snuggled into my sleeping bag on piglet watch once again, it started to rain rather hard. Over the roar of raindrops on the roof of the truck cab, Iago’s (the barn cat) wailing was so piteous I could not resist and let her inside.

I was as stretched out as possible on the back seat in the cab and each of the dogs had staked out a front seat. When the cat arrived, our peaceful arrangement went to he!! in a handbasket. First, Iago visited each of the dogs, purring and chirping and rubbing her head against their faces. This is a peculiar kind of torture from the dogs’ perspective – they know they are not allowed to chase the cat and inside the cab, there is hardly room to turn around, never mind play tag.

After she had tormented the dogs, Iago crawled into the back with me and plunked herself on my head, purring and cuddling. This was too much for Tuulen, whose jealous tendencies are legendary. He leaped into the back seat and squeezed himself behind me. There followed a licking war. Tuulen licked the cat, the cat licked me – each tried to be cuter and more cuddly than the other so I would stroke only cat or dog, but not both.

Iago sat on Tuulen’s head so she could have better access to my face and stop him from talking to me. He protested by pushing her out of the way and trying to wriggle out from behind me and onto my pillow… He is far too big to fit on my pillow, particularly when that space is being defended by a determined cat.

Meanwhile, I was getting pretty desperate for sleep, so I burrowed under my sleeping bag and left them to fight out their turf war somewhere above me. Eventually, after both had fallen off me and the back seat a couple of times, they each managed to stake out an acceptable bit of territory and fall asleep.

I must say I was toasty warm, but man, oh man – what I would give for a decent night’s sleep in my own bed!! Come on, Olivia! Deliver!

Mimi at the Window

Warning! Do Not Sit Down!

At least, don’t sit down anywhere that Iago (friendliest barn cat on the planet) can find you. She will mug you, jump on your back, smother you with kisses, turn on her rumble purr, and do everything in her considerable feline power to stop you from getting back to the job at hand… 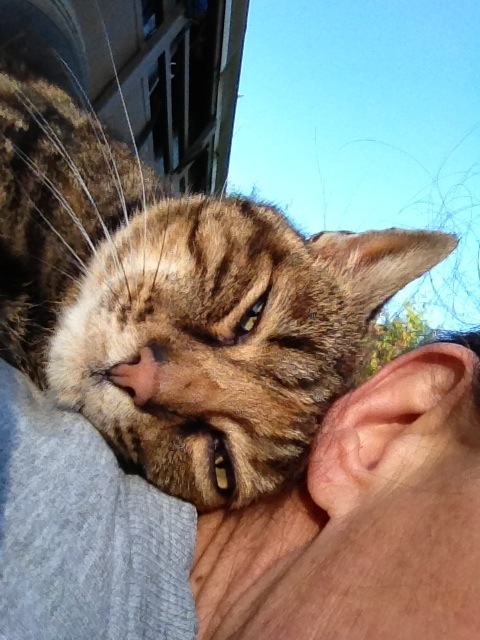 “Heh, heh, heh – this human thinks she is going to unhitch the horse trailer… Wrong!” 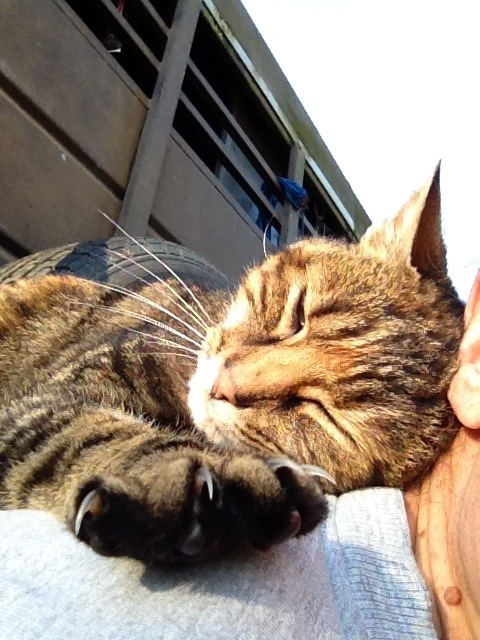 “First, I will give her a massage with bonus acupuncture treatment…” 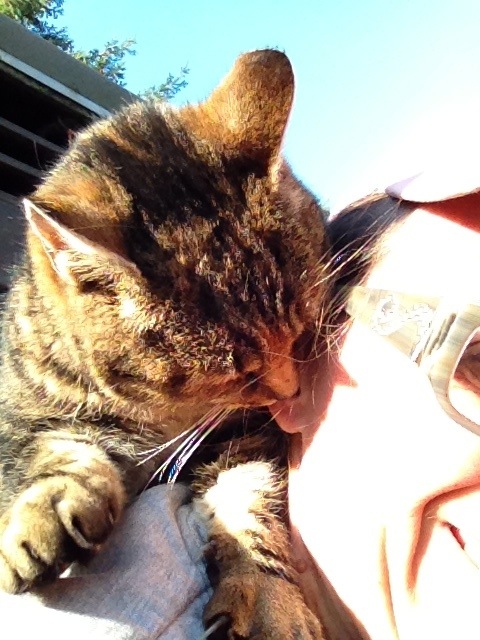 “Then, I will clean out her ears… hold still, human!” 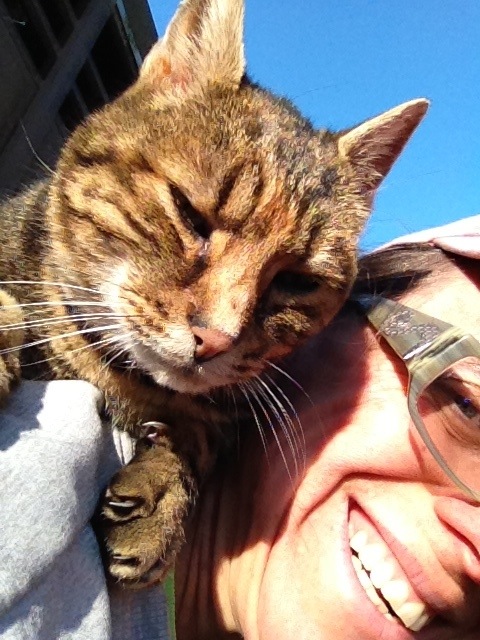 “Oh it’s so easy to make these humans laugh… Now. Let’s see if she’ll follow me up to the barn and give me a snack.”