So then, Juliet drinks this potion stuff (didn’t her mother ever tell her not to take drinks from strangers?) and, sure enough, she falls into a deep, death-like slumber. Fools everyone – her mother, her nurse, all the townsfolk and, yes, Romeo! Somehow a letter describing the intricacies of the plot-twists never quite made it from the Friar to poor old lover boy… 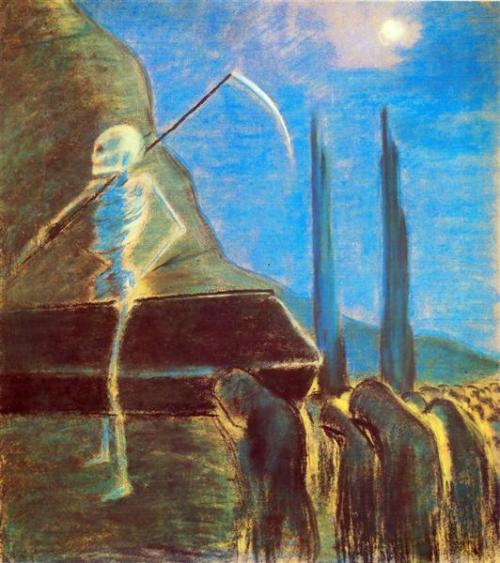 Today, being Canada Day, was a day of processions, though not of a funereal type.

Spirits were high as we sang, danced, and laughed our way through the streets of Canmore!

Ok, life is just sometimes going to get in the way of the blog. Rather than agonize over a missed day and beating myself up over having to start the count again at 0… I’m not counting any more. Until such time as things settle into a nice, boring routine around here, at which point I’ll pen some nice, boring blog posts.

Meanwhile, here’s the next installment of, “What happens in Romeo and Juliet?” – the brief, illustrated edition…

The dude in the bell bottom pants at the top is Friar Lawrence. But, our version of R&J takes place the late 60’s, early 70’s, when bell bottoms were oh so cool. Hey – if you are around in Canmore tomorrow, come on down to the Canada Day Parade – quite a few cast members from both shows will be in costume and taking part!!

I know Juliet looks a bit like Gretel (of Hansel and Gretel fame) in this fine drawing, but take my word for it, that’s Juliet. Gretel never had a knife or she would have dispatched the old witch a lot faster.

If you are hoping to come to see the shows (afternoons will be The Apple Kingdom, a musical fairytale with princes and princesses and the most adorable lizard ever, and evenings Romeo and Juliet), performances start July 4, so get your tickets if you don’t want to miss out!! If you are trying to decide whether to come based on the how good Juliet looks in my drawings… well, our real life actual Juliets are lovely, fine actresses who look a LOT better than depicted… (there are two Juliets – Kiki Monteith and Sarah Keith are alternating shows). Likewise, both Romeos (Ben Francis and Liam Brett) are better looking than my scribbles may suggest. What is entirely accurate, though, is that both Romeos flop to the ground in despair, weeping and wailing and acting like limp noodles… you know, typical woe-is-me, my-life-is-over teenager stuff. For that matter, Juliet has her moments of misery, too… One must keep in mind that this is R&J and maybe they weren’t actually being that melodramatic about their problems…

(If you missed the first installment of R&J – the Comic Strip – here’s the link to the earlier post). 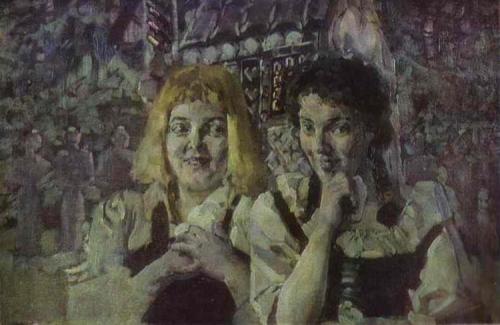 Hansel and Gretel by Mikhail Vrubel, 1896 (You see what I mean?)

We are fast coming up to opening night… and that means rehearsals come rain or shine.

Given we will be performing in the park, we can’t be put off by a sudden drop in temperature, howling winds and bucket-loads of precipitation.

We are in the mountains, so wait a few minutes and the weather changes.

The sun came out for a bit and it was every man, woman and child for him/herself… So many great brawls! My admiration for our fight choreographer, Anastasia St. Amand knows no bounds… I want to write a play full of ugly fights just so I can have an excuse to work with her again!

Plenty of people in town have wandered past and enjoyed watching bits and pieces of rehearsals, but there’s just as much going on behind the scenes. The mask-making project is racing along (suddenly the first show seems really, really close), costumes are being stitched, props made, sets built… It is always so cool and so nerve-wracking to see shows come together. Just when it seems an impossible feat to pull off – yikes! There’s an audience out there and somehow the show happens!!

Sometimes it seems that my life is a series of different digressions, fascinating side roads that are way more interesting than the whatever the main road was supposed to have been.

Those side roads are braided, looping back and around themselves like Celtic knots, leading to familiar corners rounded and re-encountered when least expected.

At the moment I’m exploring a theatre cul de sac where the familiar and the new are sending me back to the very beginning of my acting career.

Wow! Look what I found online in the archives of the Banff Centre! That’s Dad (holy smokes he looks so young!) in about 1970 teaching a student… (reference #A 05 01 09, no photographer listed).

Back in 1969 when we first came to Canada from Australia we moved to Banff in the Rocky Mountains of Alberta. Dad was the first Artist in Residence at the Banff School of Fine Arts (now known as the Banff Centre for Arts and Creativity).  I was all of 8 and determined to perform my way onto the stage. I took ballet classes and enrolled in an acting class for kids. I landed a small part in a play. The director of that play and my teacher was a dynamo called Shirley Tooke. 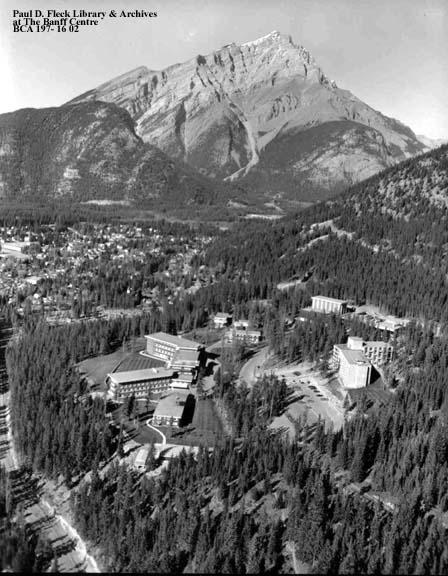 I’ve thought about Shirley many times over the years. She was the first person I had ever met who took theatre seriously. And, more to the point, she took me seriously, even though I had pigtails and could barely see over a table I was so short.

Imagine my surprise and delight when I ran into Shirley at the 40th Anniversary gala event hosted by Pine Tree Players the other night. Turns out Shirley has been working her magic, directing plays, mentoring actors, and making theatre happen here in the Bow Valley for decades! Everyone in the room had a connection to Shirley, a story about how instrumental she has been in terms of nurturing and developing all things theatrical around here!

I remember going to this production of the opera, Hansel and Gretel back in 1970. We were so lucky to be able to attend performances – ballet, modern dance, opera, music (I saw Oscar Peterson live), authors (Farley Mowat comes to mind), and theatre… And, of course, art shows. I never thought much about it at the time, but how lucky were we as kids to have access to so much art in our back yard?

It was pretty cool to see my first acting mentor from so many years ago. Though she remembered my parents (she and my dad would have crossed paths at the Banff Centre), of course Shirley didn’t remember the earnest little kid with the big dreams. But that little kid never forgot her! I’m so happy we ran into each other again and I was able to say a long overdue thank-you for the kindness, support, and enthusiasm she offered so generously.

I wish I’d had my wits about me and had someone snap a photo of us together, but I confess I was so flabbergasted it never crossed my mind to do so!

T is for Theatre (AtoZChallenge2018)

Well, I was going to write a lengthy post today about the theatre and travelling and how both are acts of transformation, but I have been utterly bogged down with work and have been staring at the screen for most of the day. So, this will be quick as I am ready to fall over.

Instead, here are a few photos from recent theatrical experiences…

This little theatre in Paris is where I went to see How to Be Parisian in One Hour by Olivier Giraud. The show was lots of fun to be sure, but I was just as delighted by the theatre itself (Théâtre des Nouveautés). One of the oddities was the numbering system of the seats (which is perhaps why there were actual ushers taking showing audience members to their designated places). In the center of each row the two middle seats were 1 and 2. Then, moving out toward the aisles were 3 and 4 (3 beside 1 and 4 beside 2).  It would be lovely to have a place like this in Canmore (though perhaps not with the wacky numbering system)!

At the Theater by Mary Cassatt, 1879. Sitting in my plush velvet seat, I could almost imagine a child like this watching from the balcony at the little theatre in Paris.

Not that there is anything wrong with Black Box Theatre at Artsplace (that’s where we did Sex With Strangers earlier this year). 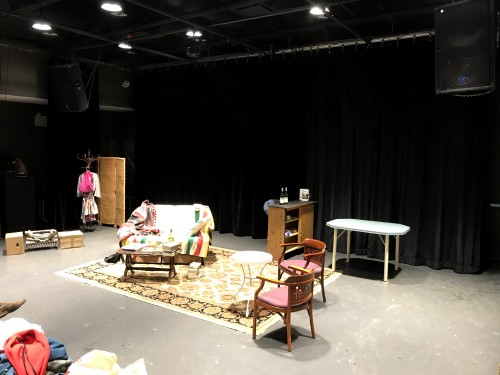 Beginning to dress the set for Theatre Canmore’s production of Laura Eason’s play, Sex With Strangers.

But neither the theatre at ArtsPlace or the Opera House has quite the same vibe.

Working with Deborah Ariss on Strong as an Ox for the 10-Minute Play Festivus was a ton of fun. Can’t wait for next year! (Photo by Toomas Meema)

One of the things I like best about the theatre is the way one can transform yourself into completely different characters.

Here, Allegra of the usually-transluscent skin and perfect makeup transformed herself into a homeless heroin addict and I had a go at being a grumpy old woman (and Ally’s silent bus-stop companion in the play My Higher Power by Melissa Klein). This was also performed at the 10-minute Festivus at the Canmore Opera House.

This passion for acting goes back for as far as I can remember – here’s a photo of me when I was not much older than Ally is now, getting ready for my role as Puck in A Midsummer Night’s Dream…

Yah This is Red (Except for the Curtains)

And that, dear readers, is what happens when I sit down to write a post when I should be placing my weary head upon my pillow…