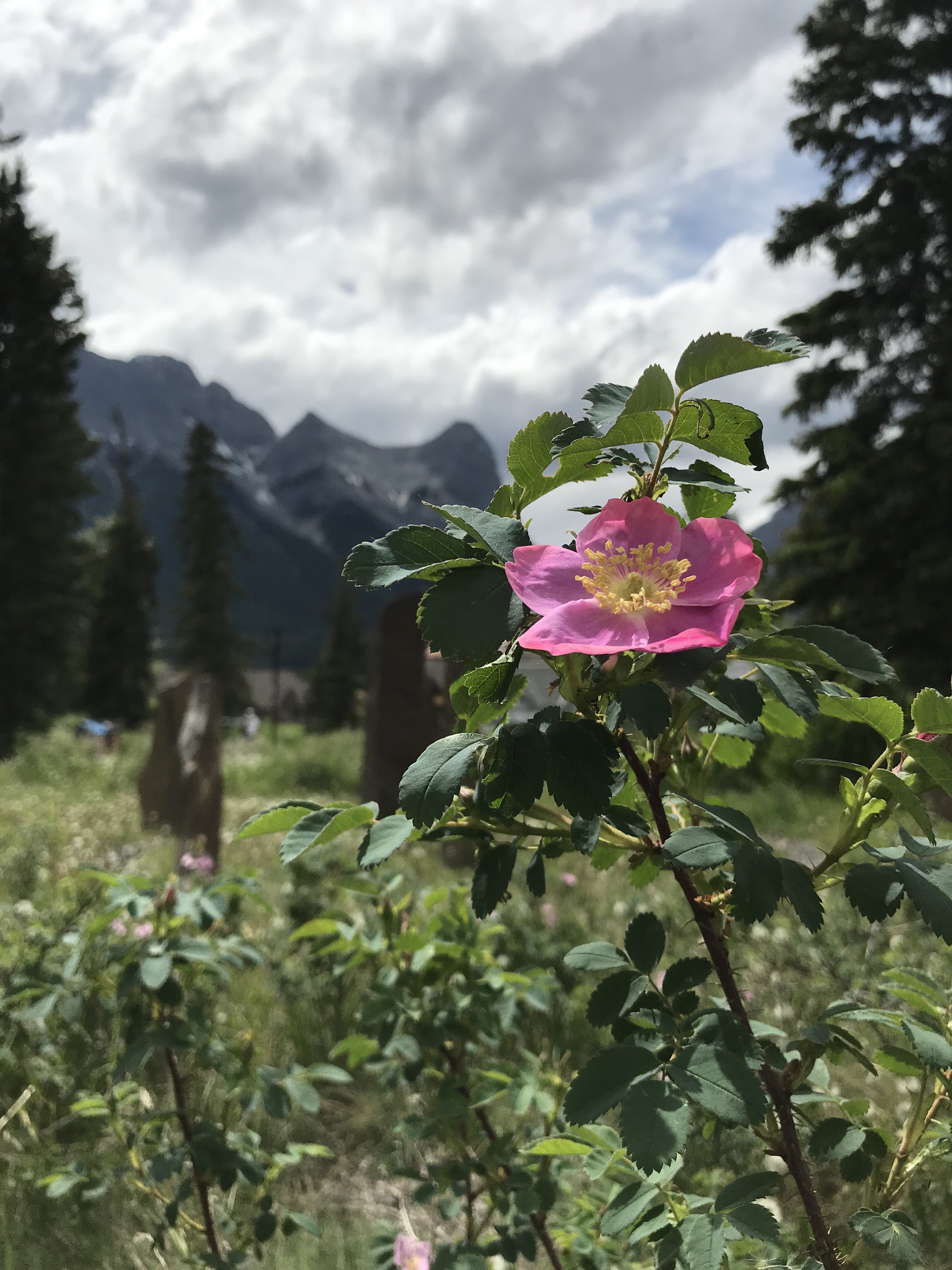 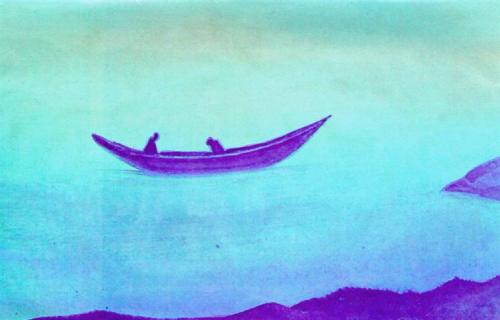 Another super busy day today, so I just have time for a quickie post… 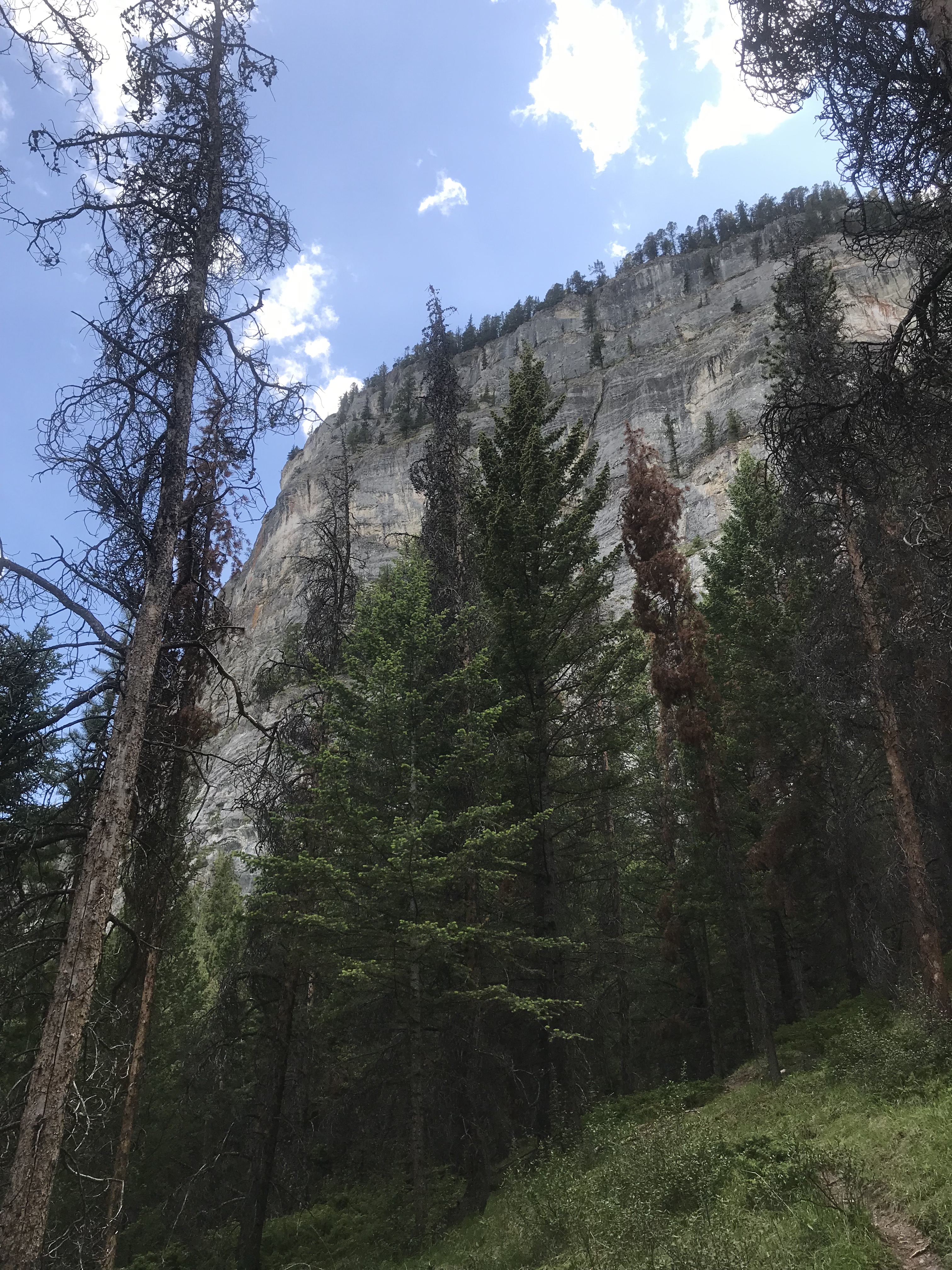 After another stint of Ghost Walk research and planning in Banff, caught up with Fabio and Joe and had time for a couple of quick climbs on bolted sport routes on the back side of Tunnel Mountain before rushing back to Canmore in time for a lovely evening of pizza and conversation with friends.

The view from up there? Pretty amazing… (we were climbing at The Scoop)

I took some more reference photos for my vertigo art project…

The perspective is a bit weird in this one. And the anatomy is odd… it looks like my knee is bending backwards… But, you do get a good idea of the scale – the belayer’s head far below and the trees from above…

It will be good to have some time to play with this some more… I also took a whole lot of not very good shots of Joe climbing and will practice doing some little drawings of climbers in odd positions… not that Joe was doing anything strange, it’s just climbers do manage to contort themselves in strange ways to get where they are going. 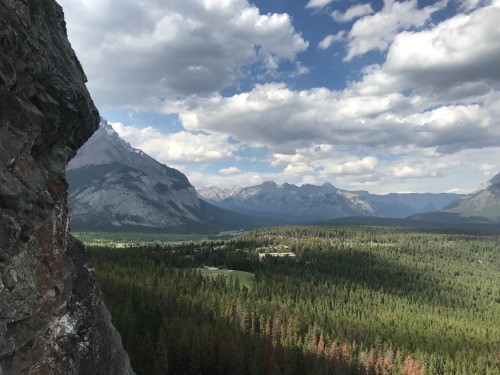 Lots of great clouds today – excellent for dramatic skies in photographs but, sadly, bringers of bad news as the weather is deteriorating over the next few days… There’s snow in the forecast overnight on Sunday!!

A different take on contortions… this is Salvador Dali’s “Topological Contortion of a Female Figure becoming a Violoncello.”

The next few days don’t bode well for long posts either – lots of work (editing the Medically Assisted Dying manuscript, learning, lines, rehearsing, perhaps a climb between rain showers…) but at the very least I’ll try to get a photo or two up…

I spent much of the day today hiking from end to end of Banff (and back), reflecting. Ostensibly, I was figuring out exactly where I need to go when I lead my first ghost walk, planning where to tell which story… But there was lots more going on than just deciding when to mention the various apparitions. Wandering around the streets and alleys, peering into back yards, reading all the plaques (they weren’t there when I lived there, way back when), catching glimpses of the familiar, being shaken by all that has changed… I kept alternating between regret and sadness that we ever left and delight to be back and looking at my old hometown with fresh eyes.

All day today the world kept shifting between the intense colours of early summer and the black and white filter of powerful childhood memories.

When I was a kid sometimes the guys (they were mostly men back then) would let me ride my horse at the back of the string of horses when they were brought down from the Banff Springs Hotel to the barn near the rec grounds. I pretended like I was actually important and had a proper job to do, though I was really just following along. I loved the way the tourists would point and say, “Look how small she is!” as I sat astride my much-too-big-for me horse, Ace. 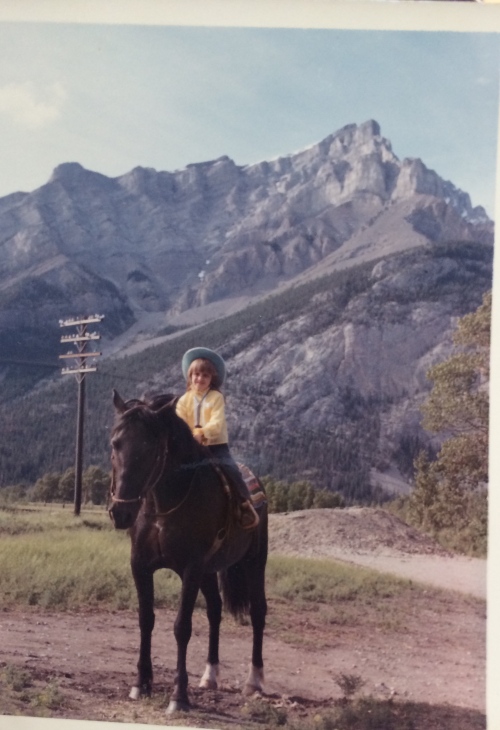 Ace in front of Cascade Mountain. About 1970.

As a family, we travelled a lot when I was young and until recently I was hard pressed to say what place I considered to be ‘home.’ Now that I am back in the mountains, though, I feel like I have come home, in geographic terms at least. Walking around in Banff, I think that’s perhaps the closest I will ever come to identifying with a specific place in such a way that I feel that’s where I come from. It’s a very strange feeling because I don’t even live in Banff (and probably never will again) – I live down the road in Canmore. But Canmore feels like the place I live at the moment that’s very similar geologically speaking to a place I once called home. And that is different to actually being back at home.

Oh, it’s confusing. I keep finding myself time-slipping, taken back almost five decades to the first summer we spent in Banff in a cabin not much different to one of these:

Back in the day, accommodations for visitors were in short supply (actually, that hasn’t changed much). Enterprising locals built cabins behind their homes and rented them out. When we first arrived in 1969, we lived in just such a cabin for the first summer until we moved into a small house on Grizzly Street a couple of blocks over.

My most vivid memory of that first summer was being awakened at dawn by banging noises behind the cabin. No, it wasn’t a ghost… it was a female grizzly and her two cubs raiding our garbage cans. Mom, my brother and I watched through the window until they had taken what they wanted and ambled off.

Those were the days before animal-proof garbage cans and, actually, before feeding the wildlife was strictly verboten. Somewhere, I have photos of us feeding crackers to elk outside the back door of the Grizzly Street house. On my next trip to the coast, I’ll dig through the boxes of old photos and find a few to post…

For now, though, my memories from long ago and the new impressions from today are doing a strange dance, not quite in synch but not quite not in synch either. Do you know what I mean?

I am too tired to think any more about this tonight (and, my jaw still hurts so I just want to go to bed), but I’ll leave you with a question or two: How far away from ‘home’ do you live? In our ever more mobile world, what does home mean? 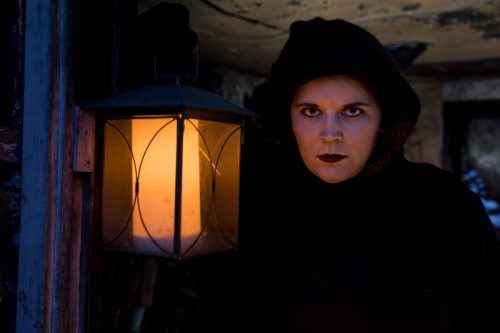 Helpful tour guides will lead Ghost Walks in both Canmore and Banff this summer. I’m going to be one of them… For more information, visit the Theatre Canmore website.

Whether you are a skeptic or a believer, you have to admit ghost stories are a lot of fun (and, just a wee bit scary!) This evening I learned things about the sleepy town of Canmore that I never knew before… and was reminded of other stories I had vaguely heard of but didn’t know a lot about.

The Banff Springs Hotel (in the background) is said to be one of Canada’s most haunted places… That’s me climbing on the other side of the valley on Tunnel Mountain.

Spending part of my childhood in Banff, I had heard some of the stories relating to the iconic Banff Springs Hotel. The one about the bride who fell down the stairs (possibly after setting her dress on fire by getting too close to some candles) is one that stuck with me.  But during this evening’s training session, I heard about a whole lot of other mysterious happenings in the Bow Valley.

The Ghost in the Lantern, by Utagawa Kuniyoshi

Some are said to be benevolent, some spiteful, while others are tricksters through and through. Whatever their flavour, ghosts have intrigued writers and artists since we first began to tell stories and I’m quite looking forward to sharing some ghostly tales over the summer. 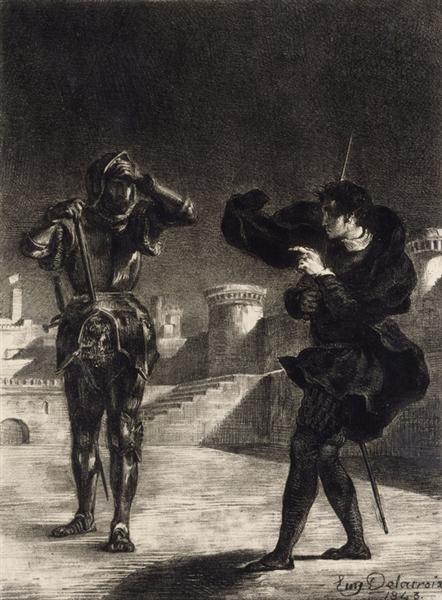 Hamlet Sees the Ghost of His Father, by Eugene Delacroix, 1843 – Shakespeare included quite a few apparitions in his work…

The idea that those we love might not really disappear after they die is one that is certainly appealing. And, there’s no question things happen in the world that science can’t quite explain (yet…) Whether or not apparitions are ‘real,’ sharing stories of our past and the people who have lived in this valley before us is a cool a way to connect with our history and to honour the memories of those who have gone before us. Who knows, perhaps some of those ghosts will join us as we wander the streets of our mountain towns…

The Spirit of the Dead Watches, by Paul Gaugin, 1892

Have you ever had a paranormal experience? If you have a great ghost story to share, I’d love to hear it!

So I was pretty high up on a climb on Kid Goat (Blue Bubble) when it occurred to me it’s really hard to capture a real sense of how it feels to be up that high above the valley floor in a photograph.

A vista like this sort of conveys scale (those are tall trees down there, and they don’t look very big). But what is harder to capture is the sense of vertigo when you are actually directly above stuff, like when you are at a hanging belay on the side of a cliff…

So, I took a bunch of reference photos and what I think I’ll try to do is a drawing or painting that exaggerates certain elements of the composition to try to better reflect the feeling of being up there… 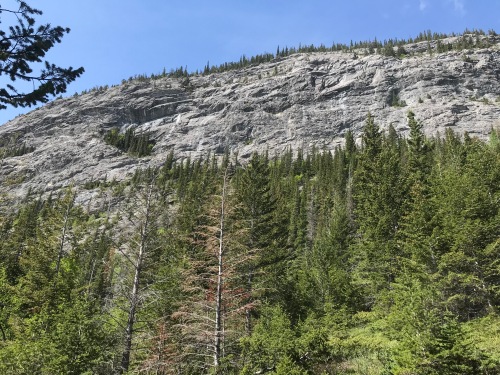 Here’s a view of the climb from below, from the approach trail.

Dad has been very helpful, sending me examples of work by people like Sonja Delaunay and Andre Derain, who both used exaggerated colour and perspective to get their point across.

And then I found this one, also by Sonia…

Which was a bit odd, because I’d been playing with colour blocks in my notebook just moments before I found her work after following a link sent by Dad… 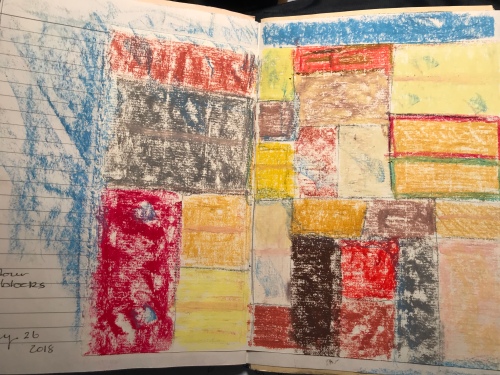 My blocks are a lot less solid than hers (pastels on textured paper rather than oil paints in Delaunay’s…). And my palette is totally different, of course… but on that front I was inspired by Josef Albers, about whom you will hear more in the days to come as Dad and I have had several Albers conversations and, weirdly enough, he is also featured in a current issue of an art magazine (which I stumbled across online and have now lost again… I’ll retrace my steps and try to post a link when I get back to Albers properly…)

It has been another busy day and I need to go find some grub, have a shower, and take another look at the scenes we’ll be rehearsing tomorrow for the Canmore Summer Theatre Festival’s production of Romeo and Juliet. My creative cup runneth over!!