T is for Teeny, Tiny Tractor 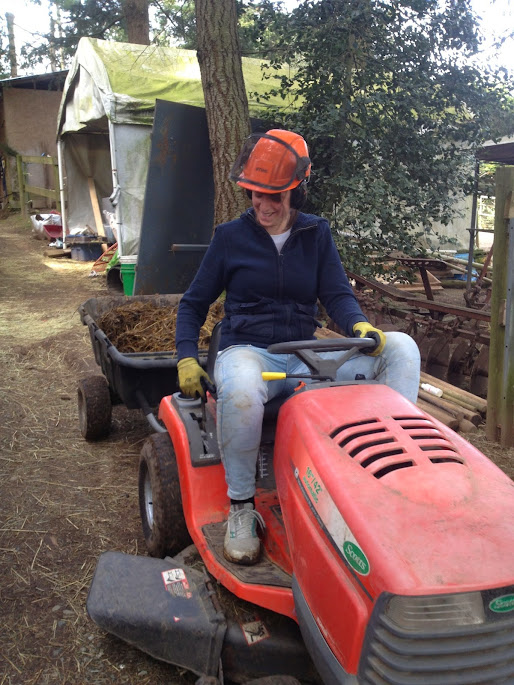 It may be modest in size, but our little lawn tractor has been chugging around the farmlet for years. Here, ME is hauling a load of soiled hay from the goat pen down to the new potato beds.

T, is also for Truck… Yesterday, I was speaking at a school in Shawnigan Lake and one of the teachers mentioned she had been reading the blog. Not having read any more about the piglet watch, she assumed the piglets had arrived and I was once again sleeping in the house. Alas, no. As in, no piglets. Yes, to still sleeping in the truck and getting up to check on Olivia every couple of hours. T, needless to say, is also for Tired.

Things are taking a (way too) long time to get done around here, what with everything being frozen solid… So I thought I’d post a few photos on the fly today as I’m not so likely to find myself inside with a long stretch at the computer.
This first one is of the frozen pond down by the sheep field…

I’d sure like to have a word with the chumps who carefully packed seeds or canes or whatever they brought with them from the Old Country and then carefully cultivated new Himalayan Blackberry patches in land formerly unplagued by these monstrous beasts. Apparently, (at least according to the Royal BC Museum website) the fool who muled them here in 1885 was an American botanist! Surely a botanist should have known better?????

Yes, the berries are sweet and delicious and wonderful for making jam and pie (I believe that was the original motivation for import), but are they worth the havoc the dense thickets are wreaking on our native species? The stands of lacerating canes are so dense and vigorous it doesn’t take long to choke and/or shade out whatever might otherwise be growing (Garry Oak groves, for example).

Fighting the prickly canes is a miserable task. Anyone who believes plants can’t think (plot/scheme/have it in for us) hasn’t fought with barbed tendrils that wrap around you, entwining your entire body in search of exposed skin or, even better, loose hair, or even better than that, a key artery.

Is there anyone who is happy about this abundance of invaders? Indeed, yes – the goats! Unfortunately, the area we are clearing at the moment isn’t one that I can easily fence or we’d just let the goats come in and strip the canes. They happily wade right into the nastiest of thickets, noshing all the way and will eat all but the oldest, toughest stalks when given half a chance. After they are done, the hogs are great at using their powerful snouts to dig out the roots, which they eat with gusto. Such a shame this isn’t really a livestock-friendly area. Not wanting the creatures to be left out of all the fun, I hauled several wheelbarrows full down to the goat pen and they were happy to help us out with a bit of pre-compost processing.

Alas, it’s up to us humans to first hack the beasts off at the knees and then get in there and dig out as much of the roots as we can.

The red layers love helping whenever we are out in the garden. They race over and see what we might have dug up. They are very good at taking care of slugs and bugs and also turning over the top layer of soil while fertilizing and are great to run through garden areas at this time of year when the annuals are done and there isn’t much they can damage.

Soon, though, when we re-seed the lawn and put in our new rockery they will have to move down to the poultry field with their fancy rolling house and take their place with the other birds. I’ll miss not having them so close to the house, though it will be great not tripping over six or seven at a time as they vie for the opportunity to untie my shoelaces and peck at my calves every time I go outside!

Oh. My. Busyness. Thank goodness it is still Wednesday and I can get away with posting a couple of recent photos of the dogs and my wayward piglet bonding. Such shenanigans are over for the moment as I have fixed the hot wire, but the inter-species chit-chat was entertaining while it was going on!

[For regular blog followers, note this series was shot on the same day that Fritz Frizzle disappeared… you can see him scuttling off into the distance in the animated gif…]

The piglet won this little contest, btw – a moment later she snatched up the apple and retreated a few steps, where she gulped it down. This, of course, sent Tuulen into a fit of whining and complaining and shooting me looks that clearly said, “How do you expect me to compete when I’m tied up?!”