M is for Munter (how to tie one), Mountains, Lady Mac, and Mixed Climbing

M is for mixed climbing, Munter and … and maybe mountains… and what about multi-pitches… Keep scrolling down if you want to get to the good part (the Munter video!)

On the first day of this challenge I was pretty sure I could dredge up something to say about climbing for each day of the alphabet… on about day five (E is for whatever E was for… M might also be about memory, or lack thereof…) I was feeling pretty panicky. I mean, you can only say so much about going up and not falling off, right? Well today I’m sitting here looking at my shortlist of M-words and I’m thinking that if I’m not careful this could develop into a long blog post! 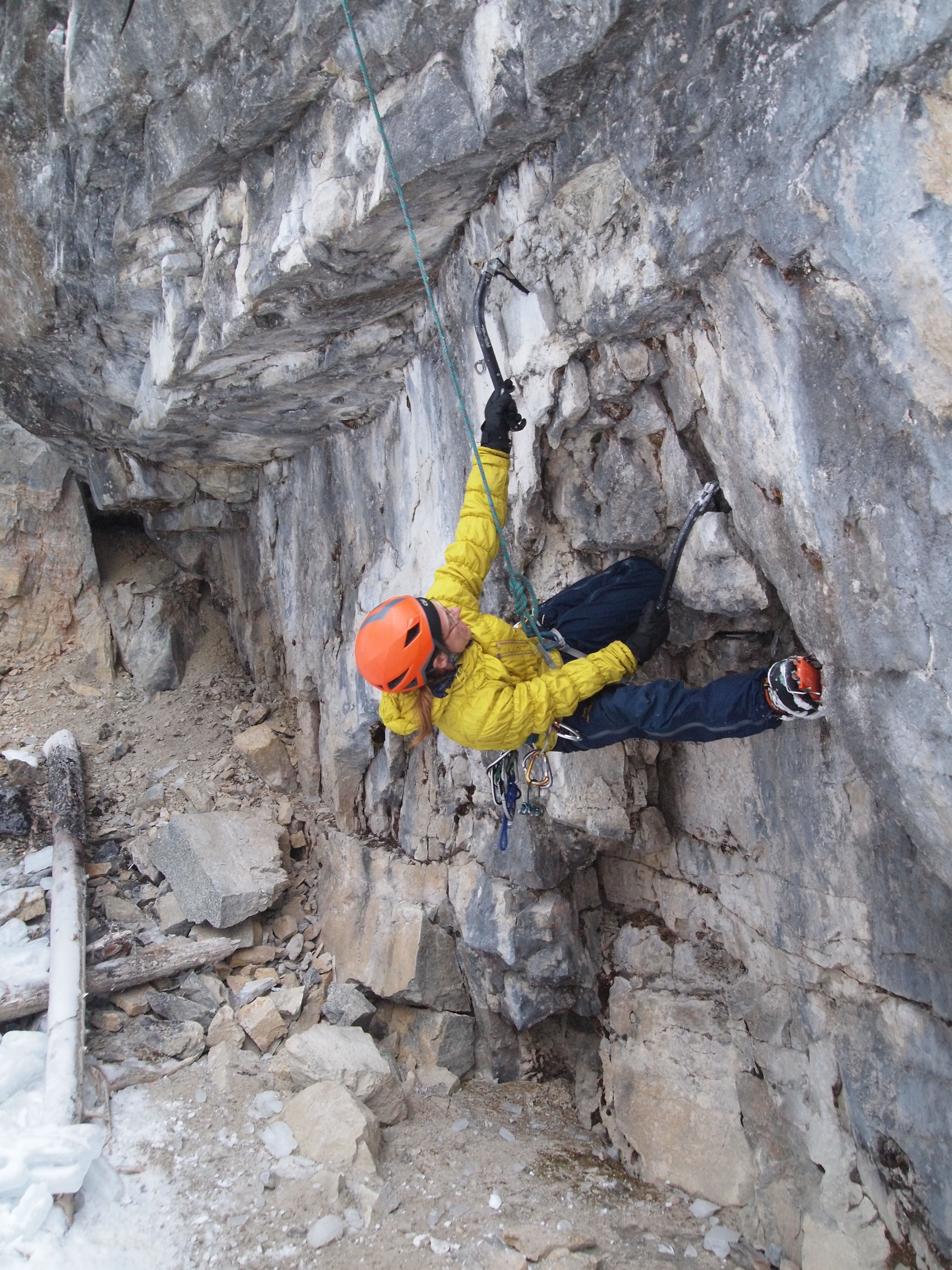 Me trying something waaaaaay too hard in the mixed climbing department. Sometimes you have to go past your limit to find the line in the sand… rock… ice… wherever. In this case, the line was about as high as you see here – just low enough, in fact that each time I fell off (many times) the rope stretch allowed me to gently hit the ground. With my backside.

I’ll start with mixed climbing, a sub-genre of the climbing activity about which I had no idea before this past winter. In the vertical world in the dead of winter two solid forms (ice and rock) come together in the mountains. Climbing when you wind up transitioning from one to the other (and sometimes back again) is known as mixed climbing. The tools used are similar to ice climbing, but look closely and small difference begin to emerge.

Crampon points, for example. On a straight ice climb two front points give you a wider, more secure base upon which to perch (though, there are those who climb ice quite handily with mono-points). If there’s going to be a lot of rock on the route, though, it’s actually easier to climb with a mono-point, a single front prong. This is because the plane of the rock is very rarely exactly perpendicular to your foot placement. Unlike in ice where you can kick your foot in to create a more or less even distribution of weight over both points, on the rock, more likely you are going to carefully place your single point into an indent, small hole, or on a modest lip of rock. The chances of said placement point being exactly wide/deep/level/spaced to accommodate two fixed points on the front of your boot is slim.

Likewise, the blades of your ice tools can be swapped out with sturdier, less razor sharp options being better for rock than for ice. Fabio has a tool kit in the car especially for the purpose of swapping out pointy bits to best suit conditions.

Though both sections (rock and ice) of a mixed climb can be hard, sometimes the transitions between one and the other provides a particularly tricky challenge.

A Munter hitch is named after Werner Munter, a Swiss mountain guide born in 1941 (though, the Italians were using it before Herr Munter, which is why it’s also known as an Italian hitch or Italian Belay). The knot is a bit like a clove hitch and can be used to belay a climber if you have a handy carabiner. What’s coolest about the knot is the way it’s sort of reversible – flipped in one direction it can be used like a brake (say when your buddy has fallen into a crevasse, you’ve stopped the fall by walloping your ice axe into the glacier and then throwing your body weight on top of the ax, and then you need to stop your friend from slithering deeper into said crevasse… After quickly building an anchor – and the thought of having to do this with gloves on and while sitting on my ice axe is nothing short of horrifying – you would then use a Munter to secure the rope leading to your fallen friend… well, not exactly – first you have to take the weight off the rope by transferring the weight of the climber to the newly built anchor… gads. That was meant to be a simple aside. Turns out it might need to be a whole other blog post.) Flip the same knot upside down and you can use it to belay your friend, letting out slack to lower her to a handy shelf or taking in slack as she climbs up and out of the crevasse.

Here’s my handy dandy how-to guide (and specially produced video!! Thanks to Fabio for being a Munter model…)

How to Tie a Munter Hitch

Step 1: Make a loop in the bit of rope that leads to the fallen climber. The end leading to the climber goes underneath. 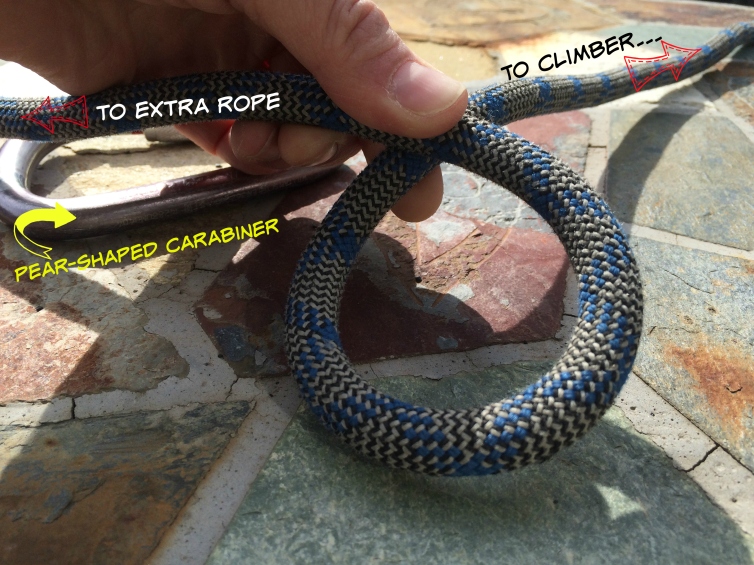 Step 2: Make another loop in the end of the rope that leads to your excess pile of rope (the end away from the climber). The excess end goes over the top.

Step 3: Fold the rope in the middle to bring two loops together.

Step 4: Insert a carabiner (preferably a nice big pear-shaped carabiner) through both loops.

Depending how the knot is oriented (which was much easier to show in the video), you can either belay (play out rope) or stop the rope from running. Now you have to watch the video, to see what I mean about flipping the knot’s orientation… Trust me. This will be the sexiest 90 seconds of knot tying you have ever had the pleasure of watching… there’s even music.

Mountains: I’m just going to throw the word in here because the entire world of rock climbing would disappear without them…

Here’s one of my favourites, the iconic Mount Rundle in the Rockies. The first mountain I ever lived on was the more diminutive Tunnel Mountain, which reminded me of a round-backed hedgehog-like animal sleeping in a bucolic valley surrounded by unfriendly giants. As a kid I hiked up the Banff side of Tunnel on various occasions and, because our house was on the lower flank of this modest lump, spent many hours building forts, exploring, and playing hide and seek in the forest behind our house. It wasn’t until last summer, though, that I had the chance to climb up the steep backside of Tunnel and quickly realized that, in fact, even though it’s dwarfed by much bigger neighbours, Tunnel is still worthy of its mountain moniker. 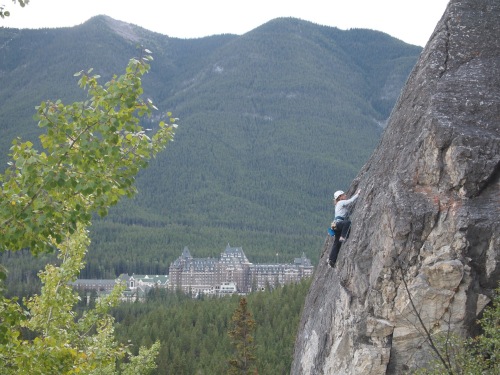 Mount Lady MacDonald is a popular hiking destination near Canmore. Here, she peeks over the trees at Grassi Lakes, where we were climbing yesterday afternoon. How handy that her name begins with the letter M.

As for multi-pitches… well, another blog post, I guess! I am out of time… making that video was exhausting.

3 responses to “M is for Munter (how to tie one), Mountains, Lady Mac, and Mixed Climbing”