The timing of my elbow injury couldn’t have been much worse, really. It happened right at the beginning of the climbing season and I was so excited about heading outside and climbing actual rocks and not just inside in the gym (which has been a lot of fun, but I was raring to go feel some wind whistling through my helmet ventilation holes!)

I briefly considered cancelling a planned trip to the Rockies (brief=nanosecond) but it turns out that with a brace and a knowledgeable guide it’s entirely possible to find routes up mountains that are stunning and fun and which require very little of one’s elbows.

Joy is the name of a route on Mount Indefatigable which overlooks the Kananaskis Lakes, a name I assume was given to the route by one of the three first ascentionists in 1995 (Peter Gatzsch, Urs Kallen and Geoff Powter).

…photo from the Gripped.com article about four routes along the Bighorn Highway in Alberta. The white line indicates the route known as Joy.

When I first heard the name I wondered if I would find it joyous to climb. From what I could find online, it seemed like the climbing wouldn’t be too hard and would require little if any pulling with my bad arm. It also seemed like it would take a while (it’s about ten pitches long and though none of the sections are difficult, think about marching uphill on a pretty steep grade for several hours after having recently arrived from sea level and you can see why I imagined there could be a bit of huffing and puffing and calf-burning going on toward the top).

The hike in from the parking lot took maybe 45 minutes to the bottom of a truly dreadful rock pile.

Knowledgeable guide: “We are here. We need to go up there.”

Experienced companion: Halfway up the rubble pile before I could even get started. (See her way up there?) Knowledgeable guide: The trick is to take small steps, find a level place to put your foot, and get into a rhythm. Me: Rock piles suck. I thought we were here to climb a mountain?

Things I learned about the Rocky Mountains:

1. They are falling apart. The quantity of crumbled rock that has fallen from on high is staggering.

2. A huge expanse of fallen rock lying at the base of one’s objective is known as talus.

3. If the resting angle of the talus slope exceeds 33-37 degrees, things will start to slither. I am glad I did not know this and had no way to measure the angle of the slope we had to traverse because I would likely have enjoyed my wobbly trip even less.

4. Marching across a talus slope is an obnoxious exercise. Every step is uncertain. It’s pretty steep: even though it’s not anything like a cliff, losing your balance would suck big time. I could easily imagine slipping and sliding my way toward the bottom, surrounded by a hail of rocks big enough to snap bones. When this sort of thing happens one engages in some sort of self arrest procedure. This basically means using boots, hands, walking stick, teeth – anything to dig in and grab on and stop sliding. This seems all well and good in theory, but how one would self arrest in a landslide when everything around you is slithering and big enough to cause some serious damage I’m not exactly sure. Variations of this maneuver are also carried out on ice and snow using ski poles and pick axes. At this point I remain unconvinced about how much fun ice climbing and glacier whacking could possibly be. At this point, my winter heart sings sailing songs in southern climes.

5. Fortunately, if you do as you are told by the experienced guide (read the micro-terrain, place each foot in as level a spot as possible, stand up, take small steps, use your pole as your third leg, get into a steady rhythm and let momentum carry you) it is possible to pick your way over a sizeable talus slope without dislodging anything too big or toppling over backwards. The end result? A somewhat sweaty arrival at the base of the slab.

Rope Management 101: try not to get too many knots in the ropes. Try not to drop your rope over the edge. Make sure you have a knot in the end of the rope so it doesn’t slip through a belay device, which could result in you dropping over the edge of a precipice. Try not to think about stuff like dropping off the edge of a precipice or your climbing experience suddenly becomes a lot less fun.

While the two pros were busy sorting out gear, organizing ropes, and making sure essential supplies like sunflower seeds were handy, I gawked around at the view.

In the foreground to the right is the tail end of the rubble heap we scrambled over to get to the start of the climb proper.

I thought the view was pretty great right from the start of the climb, but the others insisted things would just get better the higher we got.

Looking to our right, the slab and, beyond that, Upper Kananaskis Lake.

As the winds blew clouds over the lake, the patterns of light and water shifted and changed so even when we were standing still (waiting for our fearless leader to set up the next belay anchor, for example) the show was an ever-changing treat. Though I suppose we could have sat and had a picnic and then scrambled back down over the dreaded talus slope, we were all eager to get going. 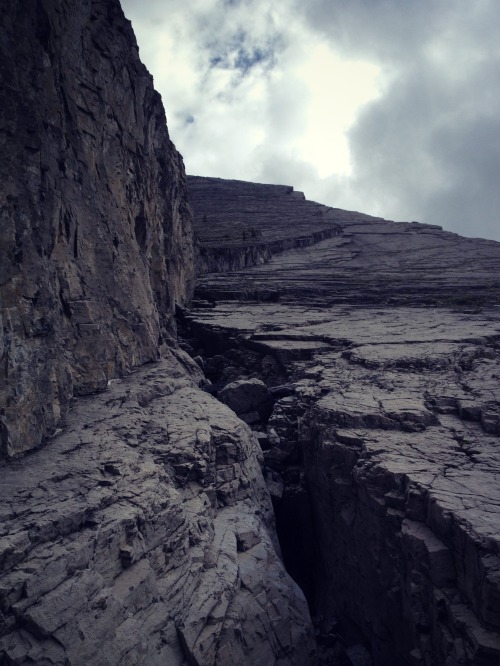 Looking up the slab – though mostly smooth, every now and then a dramatic crack opened in the rock before us.

The route up Joy is pretty straightforward – basically follow the little crack at the base of the outcropping on the left and head uphill. The crack, it turns out, is perfect for shoving in all manner of knobbly things known collectively as ‘gear.’  More about gear placement and what the lead climber does (and what we followers had to do) to come in the next post, but this is getting rather long and I’m a bit worried about creating a mega post with a gazillion photos that will take forever to load.