Apparently, gleaning (being the act of scrounging for leftovers after farmers are done harvesting their fields and orchards) was encouraged way back in the Bible. Back then the beneficiaries were meant to be tragic and unfortunate souls like widows and orphans, but I tell you, this contemporary farmer is very happy the practice has not died out entirely.

Michell’s Farm Market on the Saanich Peninsula – several generations of the family farm the land and run a successful farm market.

I am neither widowed nor an orphan, but I do have a lot of mouths and beaks to feed. As it turns out, the generous Michell clan down the road (of Michell’s Farm Market fame) has a lot of slightly squidgy squash, pumpkin, and gourds left over now that the big Halloween/Thanksgiving festivities are done. Add to that some ever-so-slightly yellowing broccoli and you have a FEAST for hogs, chickens, ducks, and turkeys.

You can imagine my delight when I had a call asking if I wanted to come pick up some goodies for the critters. Oh, yes please! Thinking there might be a box or two or three I didn’t bother changing back into farm clothes as I was heading into town on another errand right after picking up the veggies. Mistake!

The box or two I was expecting turned out to be a veritable mountain of squash!

There were also a number of good-sized pumpkins and some broccoli heads that had just started to turn a little bit yellow.

Of course, it was bucketing down with rain when I started to load and by the time I had transferred the bounty from the bins to my truck, I was soaked. 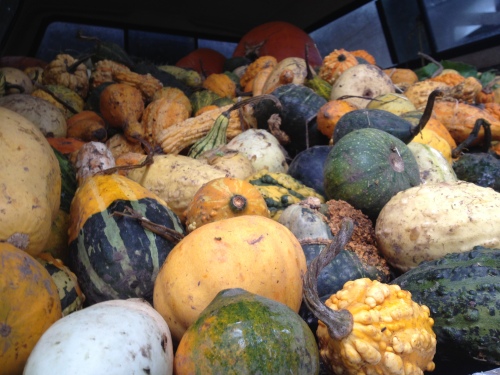 The pickup was FULL! There was an avalanche of gourds when I opened the tailgate and I had to dance out of the way to avoid being squashed by tumbling pumpkins.

I stacked everything in a corner of the hay shelter and have been doling out the treats to everyone ever since. I have to hack open the harder-shelled gourds for the birds (they love the seeds and innards), but the hogs manage to crunch through whatever I toss in their direction. 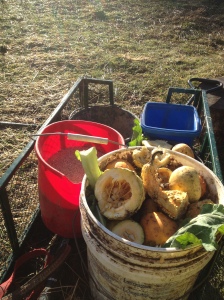 Buckets of treats heading for the turkey field.

Thanks, Michell farmers for keeping a glorious tradition alive! And, in case you are wondering what happened to my in-town errands, I was running so late by the time I had loaded and hauled away the booty I didn’t have time to go up to the house to change and had to make an appearance in not one, but two different offices wearing soaking wet, filthy clothes. Ah well, my embarrassment was a small price to pay for the sake of hearing those happy snuffling grunty noises of deeply satisfied hogs.