Come! Let’s Get Creative in France! 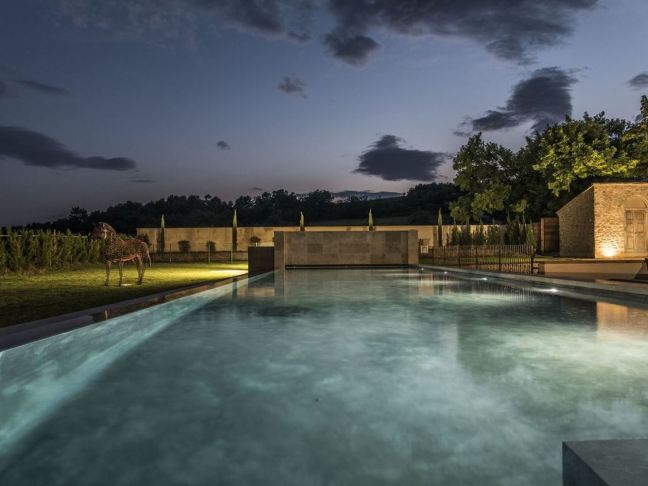 Amazing location (check out that pool!!) – nifty field trips (can you say wine? truffles? ancient markets?) – a chance to try your hand at watercolor painting, journal-writing, pen & ink, or drawing… Work on your novel… or, finally try your hand at writing a magazine article… outline a book of family stories for your grandchildren… Wherever your creative heart leads you, that’s where you’ll go… What about a scavenger hunt with your iPhone, honing your photographer’s eye? What would you do with a week (or two, space permitting, you can score a great deal if you book two weeks back to back) in Provence where we’ll feed you delicious local meals, provide you with space, time, and as much peace and quiet or inspiring workshops as you choose? 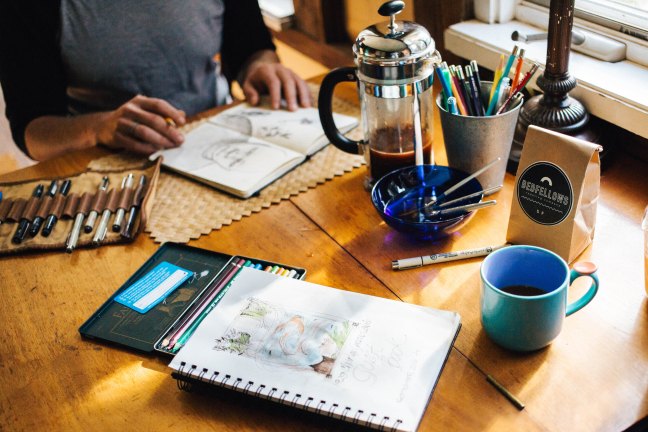 We’ve structured this retreat so people can come and experiment, play, and create with as much or as little involvement from the facilitators as you like. We’re organizing some pretty nifty local field trips, which you can choose to participate in, or not. Everything is included – we’ve made it easy for you to change your mind on the fly, opting in or out of activities as the mood strikes you. 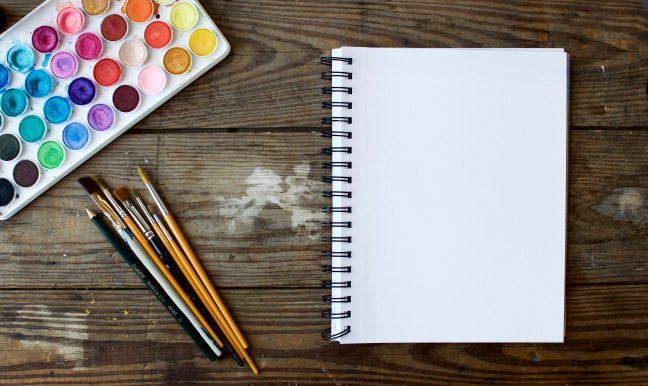 Book Your Spot – Don’t Miss Out!

For more information or to book (spaces are limited and there is a discount if you register early), follow this link:

And, watch the blog for more details… 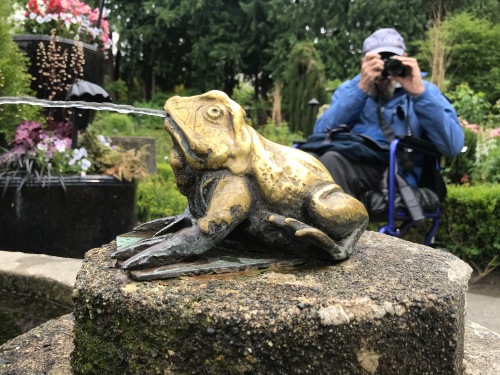 After leaving the hospital for what has become our daily morning visit to ER to deal with ongoing nosebleed management issues, Dad and I headed for Butchart Gardens to gather some raw material for drawing and painting. 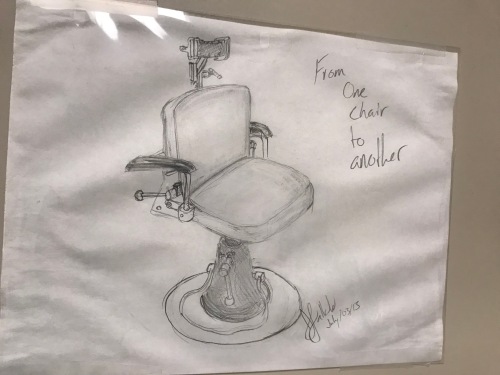 I couldn’t make out the signature, but this drawing is stuck to a cabinet in the ENT (Ear, Nose, and Throat) Room at the local hospital emergency room… It’s the chair in which Dad has spent a fair bit of time over the past several days…

It has been YEARS since I was last at the gardens and I have to say, they really are quite something, especially given the place is also a story of reclamation and rehabilitation. Once an ugly quarry that supplied limestone for Robert Butchart’s cement plant, the gardens were the dreamchild of Butchart’s wife, Jennie who wanted to pretty things up a bit once industry was done with stripping what it needed from the land. What a beautification project!

These days, almost a million visitors a year stroll around the gardens, snapping photos.

As one would expect, there are gazillions of flowers, shrubs, and trees, but there are also fountains, statues, and a carousel. I have always loved carousels and am always a bit disappointed when I’m near one without a child to coerce into riding with me!

A carousel horse statue prances near the carousel, an escapee from the endless drudgery of up and down and round and round. I took several photos, thinking I might be able to draw it later. 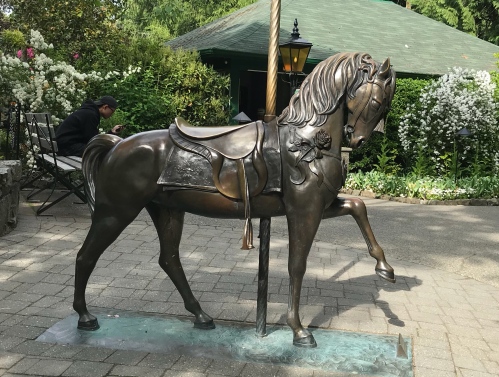 Statue of a carousel pony dancing at Butchart’s

Dad gave me a brush pen with a reservoir for use with watercolours and once I got home  I pulled out the watercolour pencils I brought with me and started to experiment. 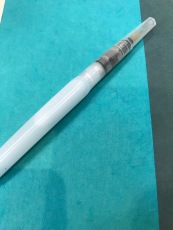 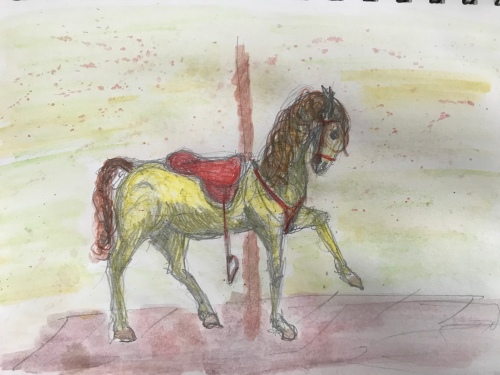 Unhappy with the pole, which looks awful, but I’m thinking that if I mess around with that it will get much worse… As it is, you can tell it’s a carousel pony, so I’m happy to leave it at that! 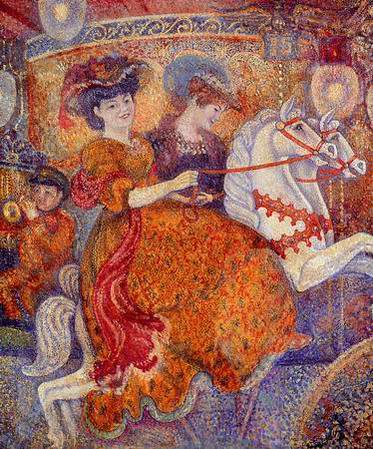 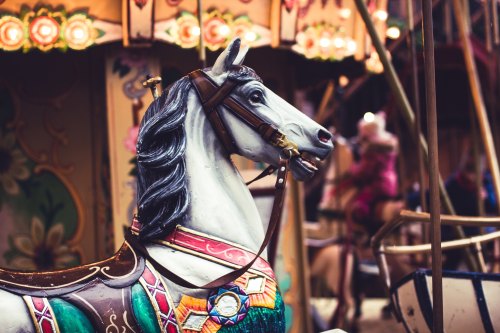 Many carousel ponies (and other creatures) are works of art themselves… I’d kind of like one in my living room, to be honest. Maybe even a row of them for people to sit on at the kitchen island… We would need a bigger kitchen island, of course… Photo by Kira auf der Heide on Unsplash

That’s it for now… I’m struggling (really struggling) to draw or paint a flower that looks even remotely floral, so you don’t get to see any of that stuff yet. I’m feeling a bit heartened, though, that with practice comes progress, so I’ll keep trucking on and see what happens next… 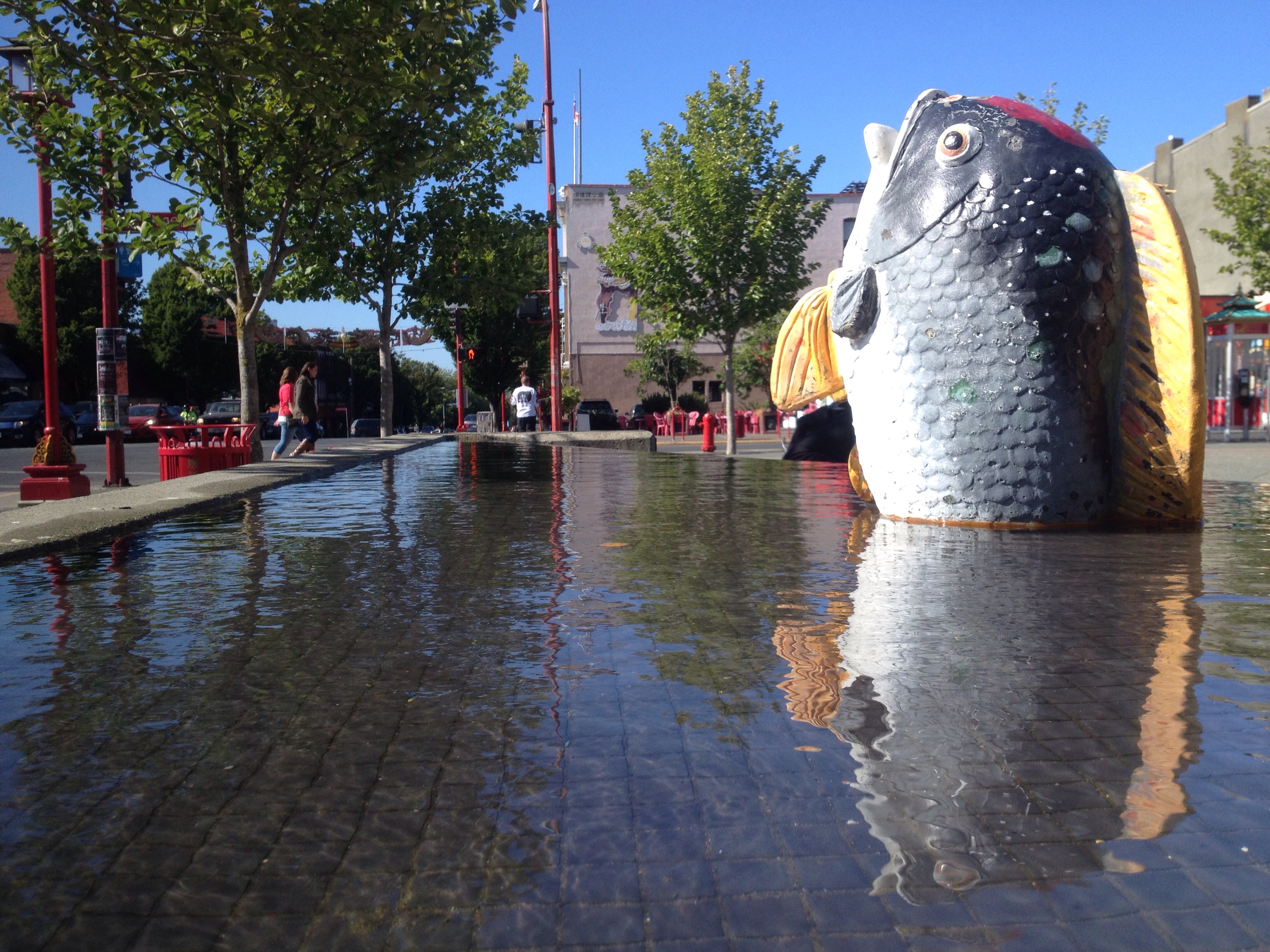 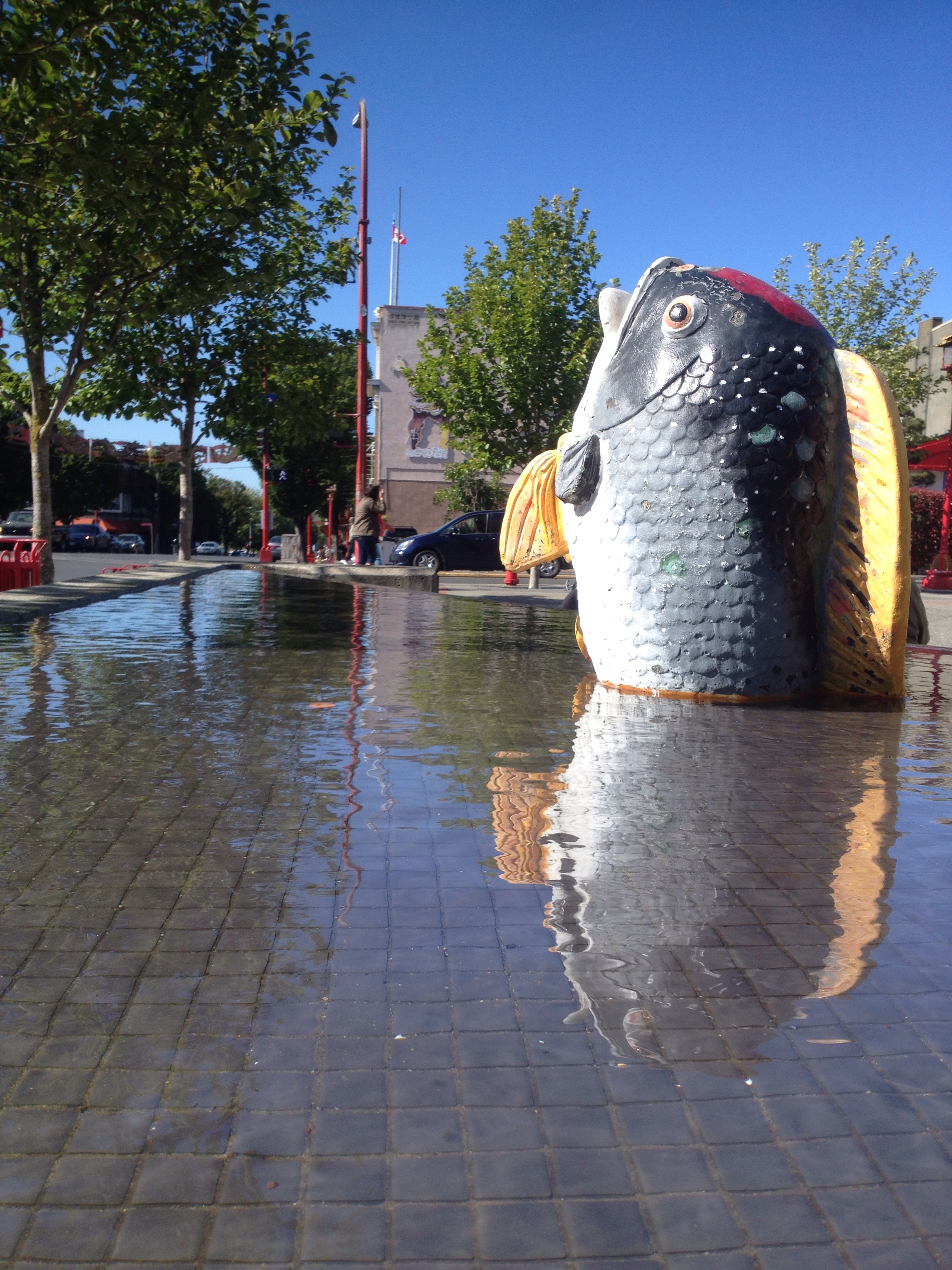 Yes, I am waaaaay behind on my daily photo challenge!! A couple of words of analysis on this challenge: Vertical orientation = more about the fish. Horizontal orientation = more about the water. And that’s all I shall say about that… I’m rushing out the door (again! – this time to spend the afternoon sailing with friends…). If I don’t post this now I shall never move on to Day 4!! 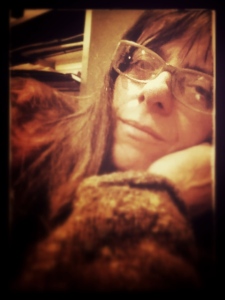 I was considering posting more snow photos (maybe we’ve all seen enough of those? And besides, our snowlettte hardly counts… ) or a dreadfully wobbly video of me chopping through the ice on the horse trough in the pitch darkness (you have no idea how hard it is to hold the phone steady and not drop it in the icy water, point the headlamp more or less in the correct direction so the axe head is illuminated, and then chop effectively… The sound effects are good, but the video – not so much). I still haven’t got around to writing up my notes from the Deconstructing Dinner talk last week (was going to do that but then reached for my purse, into which I had stuffed my scrawled scribblings, when I realized my purse is down in the truck cab…) And then I remembered that this week’s photo challenge is none other than the Selfie!!

Regulars here will know this one had my name all over it, given my recent obsession with selfies and the deeper meaning thereof… Here’s a link to the post that talked about self portraits, artists and their interpretation of selfies, and a few of mine… And here’ s a link to the [very] recent post about how my felfie (a selfie by a farmer) won some market bucks at the local community market… I kind of like that one because the chicken looks so stern and regal and I don’t typically think of chickens as looking either stern or regal…

Dad and I have continued to talk about this strange thing artists (and now every Tom, Dick, and Harriet with a phone) have with self portraits… One of the things Dad mentioned was how important it is to get the eyes right – and how challenging that can be. If you can capture that whatever-it-is that makes the eyes seem alive, you have half a chance of creating an image that makes an impression.

Alas, his comment about how hard it is to get the eyes right caught me in a goofy, ‘what else can I do with google’s image toys?’ frame of mind and I came up with this:

Then I thought I should settle down and try to do something more serious and took this one: 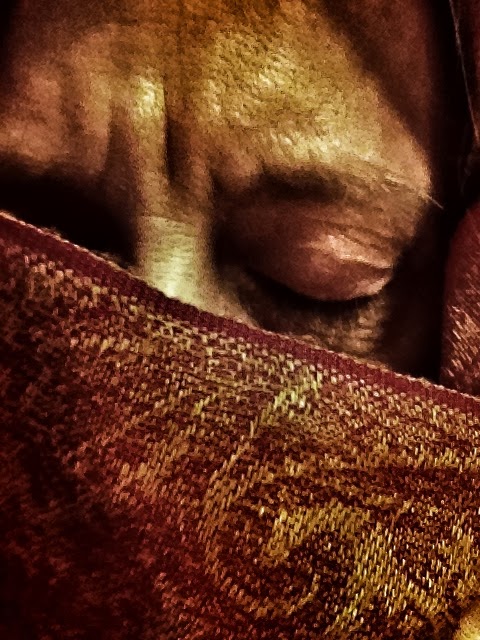 Every time I added another filter it added forty years or so, which was a tad depressing. I mean, I feel pretty tired at the end of some days, but some of these were rather alarming… 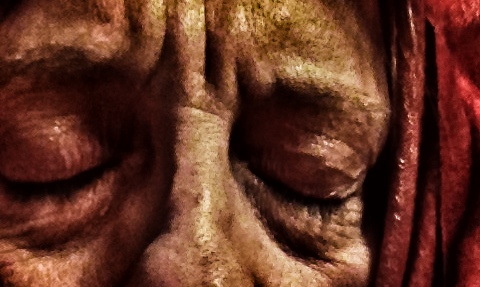 What I would look like if I were 87, lived in the desert, and had just heard my favourite goat had died while giving birth to triplets. Where on earth will I find the milk to raise the babies?

Meanwhile, Dad was in his studio obsessing about eyes. A while back he had done a self portrait in shades of grey: 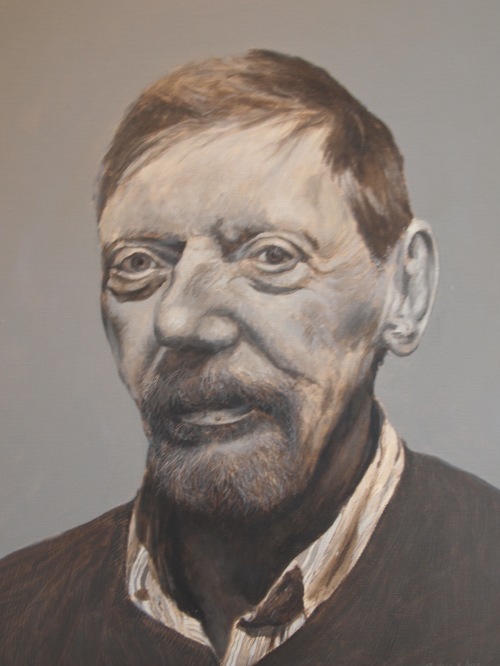 Dad photographed one of his eyes from the painting: 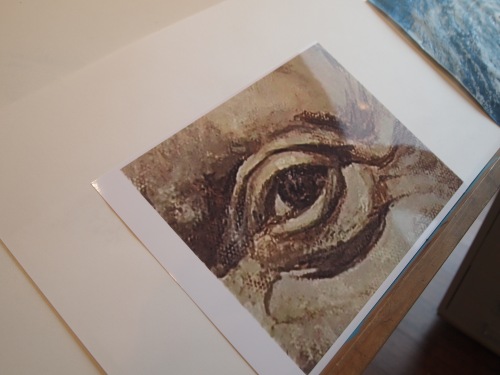 … printed it out at a scarily larger than life size… And then, he spiralled down into that eye and recalled a story from September 1960 when he and my mother were travelling together through Florida. They were holed up in a tiny rustic cabin which, apparently, was full of holes and very drafty when Hurricane Ethel struck the Florida panhandle. This could have been a scary story, but instead it was more one of those bizarre nightmare scenarios that one comes up with in… you know… nightmares.

Dad and a friend (a B-52 bomber mechanic) had completely taken apart the transmission of Mom and Dad’s 1956 Packard. Every last tiny bit had been spread out on a tarp on the floor of the cabin in accordance with the exploded drawing in the manual. Every piece had been cleaned and oiled and checked over, lined up and was ready for reassembly when Ethel rolled ashore bringing with her a gazillion bits of girt and sand and dirt and dust which blasted through the many cracks in the walls and around the door and windows, nicely coating the many delicate parts of said transmission. Dad said they hoped Ethel would carry off the car so they could write it off but no such luck. They spent the next who knows how long cleaning off every speck of crud before the transmission could be put back together again.

This made a huge impression on my parents as this was one of those stories we heard over the dinner table at various points as we were growing up… The image of that storm still, apparently, haunts Dad as this is where he went from the close-up of his eye: 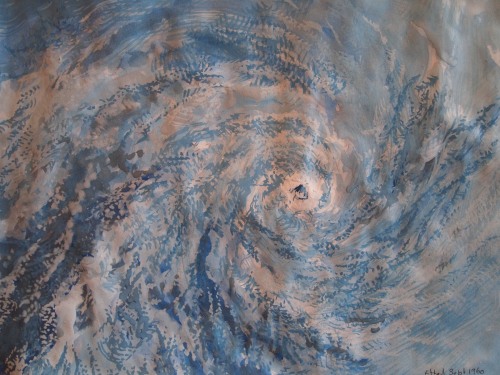 Which, when you compare it to the original eyeball 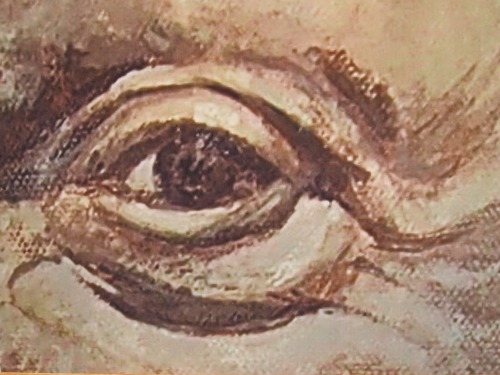 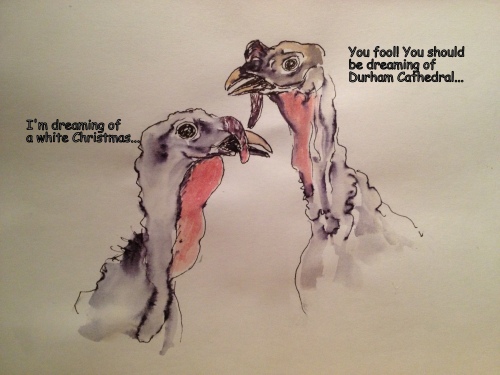 Sometimes Dad drops sketches onto my desk. These are usually delivered with interesting comments like, “the one on the right is thinking about the Sanctuary Knocker.”

So while I’m being all practical and thinking about turkey sales and recipes, Dad is busy in his studio being all artistic…  He has been doing a series of sketches and watercolours of turkeys in various stages of development. The two birds in the image above are what we call teen turkeys – young birds not quite big enough to be heading for freezer camp (you can tell they aren’t very old because their snoods are of modest proportions…).

When Dad mentioned that the one on the right was thinking about what he would do with a 37-day stay of execution I confess I returned a blank stare.

“Look it up online,” was Dad’s reply.

I know Dad is a tad obsessed with the Sanctuary Knocker at Durham Cathedral. One of his paintings featuring the knocker graces the dining room: 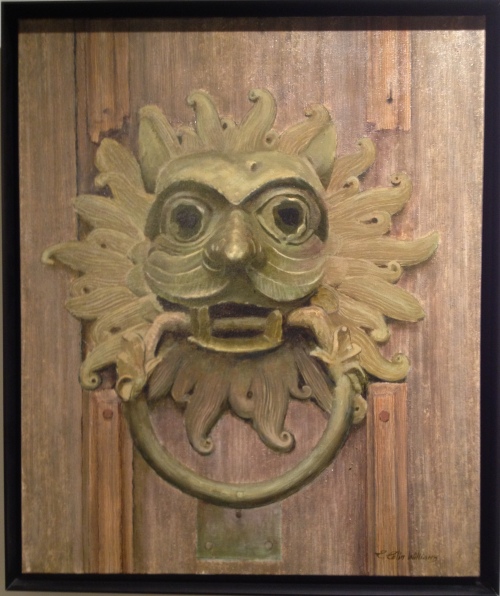 Dad’s painting of the Sanctuary Knocker at Durham Cathedral.

After our little turkey-inspired exchange I looked up the details and discovered that someone in grave trouble (usually self-inflicted trouble, like, say the person had stabbed someone else…) was allowed to thump on the cathedral door with the Sanctuary Knocker and, after being admitted, could seek sanctuary inside for 37 days. According to the Durham World Heritage Site website (which is quite excellent) the perpetrator could either reconcile with his or her enemies or plan an escape.

Good thing we don’t let the turkeys into the house or they’d be lining up to peck at the painting. Not a good thing for various reasons, but if the plotters above were successful in getting that cathedral door to swing open, 37 days from now would be much too late for Christmas dinner…

For more information about the cathedral, visit the official website.

For more information about Dad (who does have an actual name – E. Colin Williams) – visit the artist’s website.