Oh, my – what a day! Started out very early without any breakfast (you’ll see why in a minute), some writing, then a trip to Calgary where I had a cardio stress test. No panic, but over the past few months I’ve been getting a little light-headed when I exert myself. Unfortunately, that usually happens either when I’m biking or tackling a harder climb (or, on a long hike in to a crag somewhere with a pack full of climbing stuff strapped to my back). I doubt it’s anything too serious, but we are getting it all checked out to make sure my ticker isn’t likely to explode  when I’m hanging from a cliff somewhere.

Study for “The Wardrobe” by Walter Sickert, 1922 (you’ll see where I’m going with this in a minute…) 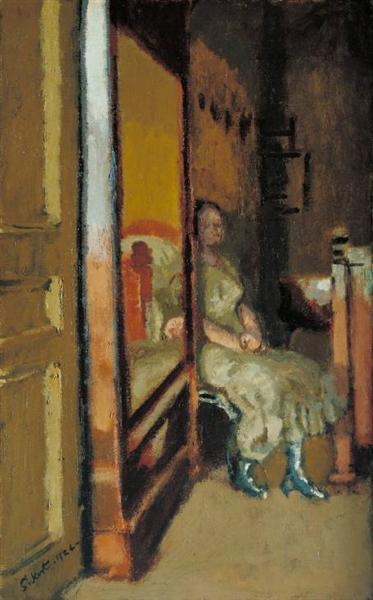 The Wardrobe, by Walkter Sickert, 1924

The cardio thing was long and drawn out – first an IV (for the dye – hence no food after midnight last night), then hooking me up to a zillion leads to give an accurate idea of what my heart was doing when I was loaded onto a treadmill and told ‘keep going.’ Fearing I might come flying off, I gripped the safety bar until my knuckles turned white. As you can imagine, my heart rate was soon way up there and the kind woman who was charged with making sure I didn’t keel over before we were done took my blood pressure every 60 seconds and kept asking, “Are you dizzy yet?”

After all that, I was put into some sort of scanner and the dye injected into my vein, and they took 6 minutes worth of pictures of my thudding heart. There followed a CAT scan and after that, a 3.5 hour break during which time I was STILL NOT ALLOWED TO EAT!!

I was, however, allowed to go to IKEA. Which we did, right after I swung by the endodontist who tortured me so thoroughly last week. They yanked out my stitches and sent me on my way. 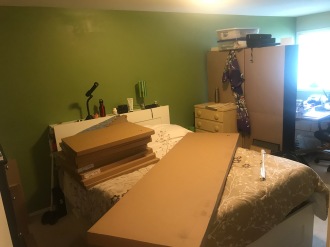 This virtual mosaic is titled, “Postmodern Study for The Wardrobe.”

At IKEA, we procured a couple of big wardrobe things in an attempt to deal with TOO MUCH STUFF in our bedroom/office space back in Canmore. Then it was back to the cardio torture place for another scan after which I was released and told to go have breakfast, lunch, and dinner.

After a stop in Cochrane for groceries, we eventually got home and immediately began to assemble the basic frames of the wardrobes.

Tomorrow, I have to write in the morning, but after that we’ll get onto the finesse items like shelves and drawers, at which point we can tidy up!! Which will be lovely. More photos to follow… Meanwhile, though, here are a couple of paintings of bedrooms…

Bedroom in Aintmillerstrasse, by Wassily Kandinsky, 1909

Perhaps, once the wardrobes are finished and installed I’ll have a go at drawing our newly decluttered bedroom…