B is for Bordeaux, Beds (in art, in the flesh), Bourse (broken), Rue de Banque, my Blue Book, and a Bunch More (including a big brass band)! (#AtoZchallenge)

Warning: This post fueled by Bordeaux and sardines (the latter not shown, though they were consumed from a bowl)

There’s nothing like a quest (and/or the promise of a freebie) to get a girl up and out of bed on a Sunday morning. As I mentioned in my post yesterday, the Musée d’Orsay was free today (as are many of the museums in Paris, Sunday falling as it does this year on the 1st day of the month… no joke!), and I was determined not to miss out!

Musée d’Orsay – I promised myself I wouldn’t use this particular word even though it’s B day today… but, I gotta’ say it – even before one starts roaming around, gawking at the abundance of stuff to be found here, the space itself is BEEEEE-autiful! Sorry. And, I promise – even though I saw a lot of beautiful things today, I won’t use the word again…

I didn’t wind up getting a super early start, which was a mistake. By the time I arrived at the museum the lineup was around the block and it took forever to get inside. The space is glorious – a former railway station – and, like all the great museums of the world, a tad overwhelming. Where to start?! My stomach answered that question for me (no, not the bathroom…) – lunch!

My table was back near the big, see-through clock… sort of at 5 o’clock.

I was so hungry I had no option – so off I went waaaaay up to the 5th floor where I sat at a table beside a massive clock, mostly transparent so I had a pretty good view of Sacre Coeur across the way while I ate. And what a feast it was!

This is what I didn’t eat… bread in a basket (yeah, being gluten free in Paris is a special kind of torture…) But the rest of the meal – ooh la la! Beans (green), breast (duck), baby greens, blue cheese… and walnuts (don’t start with B, but oh so good!).

Fortified and with a plan (while I enjoyed my meal I had a chance to study the museum app I’d downloaded in the loooooong line outside), I came up with a list of things to see that started with B. Arbitrary, yes, but when faced with a HUGE collection and very little time, one has to narrow the options down somehow. Here are some highlights.

Babes in a Bateau (or, Boat – works either way). By Claude Monet – more commonly known as La Barque à Giverny 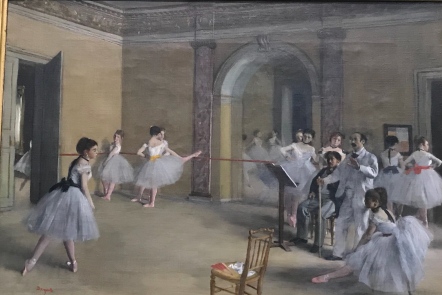 Oh I love this ballerina… Small Dancer: Aged 14  by Degas. 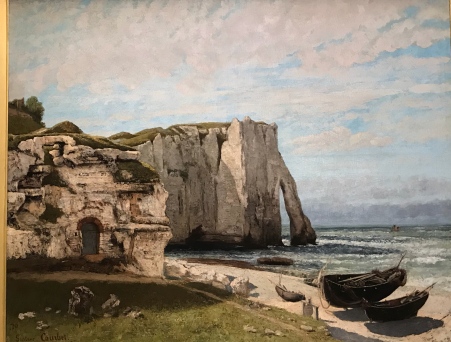 This pleasant scene in a bower… except you just know that because it’s by Gustave Courbet, that Bambi in the water has probably been startled by a horde of hunters… 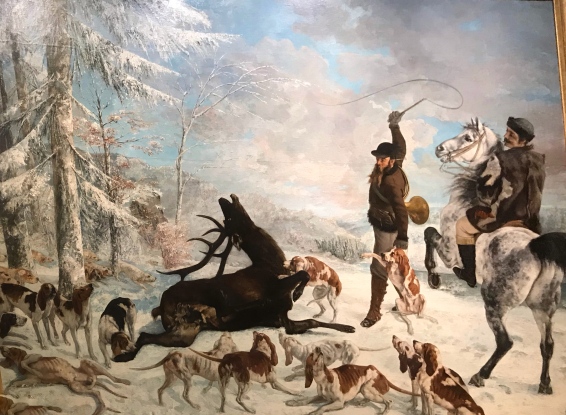 Where the bourgeoisie go to play… the racetrack. Several paintings by Edgar Degas depicted scenes from the track.

There was LOTS of sculpture, including this bear by François Pompon. 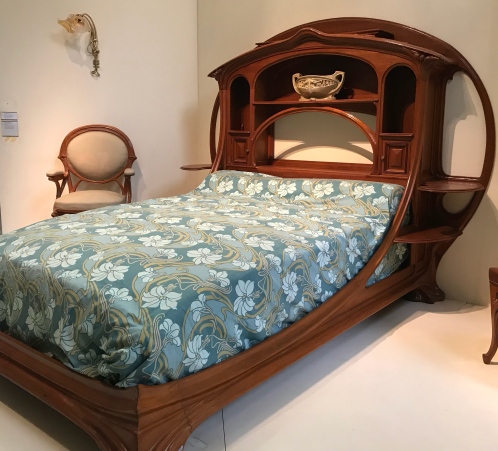 I was surprised how much I enjoyed the Art Nouveau furniture display… this bed was impressive… can’t imagine carrying it up six floors to my Paris walk-up, though.

Speaking of beds, this is a great painting by Frédéric Bazille. This poor guy with the broken leg (in traction) is none other than Claude Monét. I’m not sure what the bucket and bowl are for… bedpan options? For catching drips in a leaky ceiling? Official title is L’Ambulance improvisée (1865). 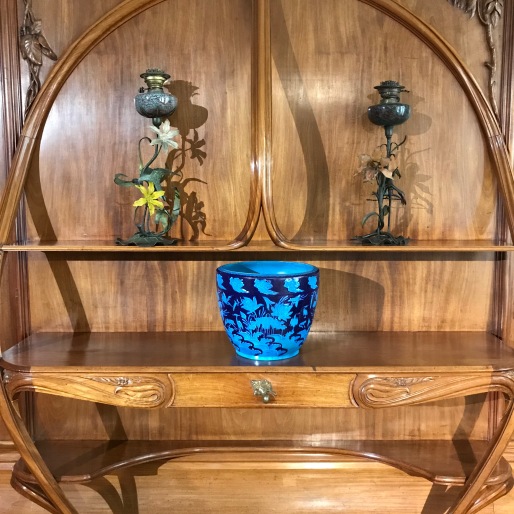 Then there was this blue vase. This is an unedited photo, btw – that thing positively glowed!

Of course, there was lots more… but I’ll try to be somewhat respectful of bandwidth and stop there, though that wasn’t the end of my day.

After the museum finally spit me out, it was back to the Metro to find the station known as Bourse on Line 3. That was a bit of a joke as that whole section of line is out of commission for the weekend. So, I walked from the d’Orsay to Rue de la Banque in search of one of the famous covered passages of Paris. I had bought a book on my first day here, a slim guide to said passages, and this one sounded cool (and was on a road beginning with B).

Galerie Vivienne is gorgeous… I probably should have saved this for the letter V because I’m pretty sure nothing I’ll see on V-day will be as interesting. An L-shaped passe built between 1824 and 1826, it’s now home to small shops and cafés.

One of the fabulous finds in Galerie Vivienne was this bookshop. Sadly, it was closed today – all the more reason to come back!

I hadn’t actually intended to buy The Covered Passages of Paris. My intention was to pick up a copy of this little blue book…

Small enough to fit in a pocket, this guidebook is invaluable, well worth the five Euros I spent – and, blue!

I had a maroon-colored version that went missing on the last day of our trip here last year and I’ve missed it ever since. Sorry, Google maps are just not the same. Especially when your phone dies… Or when you are spatially dyslexic, as I am, and find it difficult to twirl the world around to match whatever orientation Google maps is spinning at you.

Back at the square beside the shuttered Bourse metro station, I stumbled upon a market selling all manner of random things including: 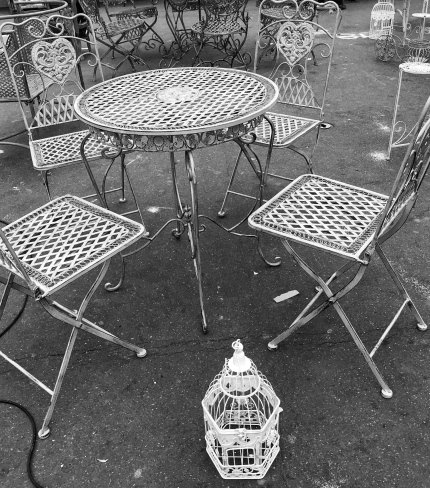 … a bistro set and a birdcage…

…and this adorable baby buggy…

At this point I could have gone home happy with my bulging bag of B booty (and, by this point, my feet were killing me), but as I approached Opera and the Metro station there, what did I hear but a Brass Band!! I kid you not…

After that, what was there to do but head home on Line 8, direction Balard…

And that, folks, is all she wrote for B-day.

For museum hounds, what’s your all-time fave museum? I know, it’s like picking a favourite child, but let me know what’s on your must-see list! C you tomorrow!

I didn’t film it, but I was one of many people who walked over and dropped a few coins in the open trombone case on the pavement… I mean, musicians have to eat, too… I’m sure you would have done the same thing! While you are in a ‘support the arts’ kind of mood, consider becoming a patron to support the creation of these blog posts, photo essays, and short videos. In return, you’ll have my undying appreciation, but you’ll also get access to Patron-only content, advance peeks at works in progress, and more – all for as little as a buck a month! It’s easy – head on over to Patreon to have a look at how it all works.