You know summer is long gone when chunks of ice fly out the end of the hose when you fill the poultry waterers.

It’s hard to know what to wish for, weather-wise, at this time of year. Living here on the wet west coast where grey skies day after day after day can bring down even the cheeriest soul, it’s hard not to hope for clear skies and a bit of sunshine. Clear skies, though, also generally mean colder temperatures – that dreary blanket of cloud is a blanket of the warming kind, too.

My farm is small and it’s spread over several neighbouring properties where I lease land to graze my animals. Even though the entire operation is contained within a kilometer radius, the difference between what’s freezing at the lowest lying, most exposed field and what’s still just wet and cold is remarkable. Yesterday morning the remaining grass down in the main turkey pasture area was crispy with frost while up at the top of the hill near our house everything was soaked with heavy dew. The water was running freely at the house but down there in turkey-land, after some ominous gurgling and crackling, chunks of tube-shaped ice shot out the end of the hose. That was too close to a full on freeze up for my tastes!

Frozen water lines are a pain in the backside around here and require schlepping of hot water from the house to whatever frozen water bucket needs to be defrosted. Given that we have years where we never freeze (last year was one of those) and over the course of most winters we endure truly cold temperatures for only a few days, it’s not really worth installing expensive water systems even here at the home farm and not an option in the various leased fields.

And so, I watch the skies and the weather reports and on a morning like today when I look outside and see slate grey sky and hear the sound of rain, I breathe a little sigh of relief.

Interested in learning who else is participating in the 30 days blog-a-thon or the five things Holly Spangler will be talking about this month? Head over to Prairie Farmerto find out!

Pippi in her “Squirrel Alert!!!!” pose (because if she is stretched up tall she is sooooo much closer to those power lines!)

I love pickled beets. The only problem is, it takes HOURS to make them! Fortunately, I was not alone and was, in fact, talked into embarking on the project by my lovely future son-in-law, Toryn. So, with all the decks cleared, we started with tons of beets from Michell’s Farm Market down the road (all of ours went into our customer goody boxes – doesn’t that just figure!).

First step was to sort the beets into piles that were more or less the same size. The smaller ones we cooked whole, larger ones were chopped up a bit first. We boiled them for about ten minutes after first topping and tailing.

After boiling, we doused the beets in cold water. That makes the skins slip off quite easily.

THIS is a great tool! 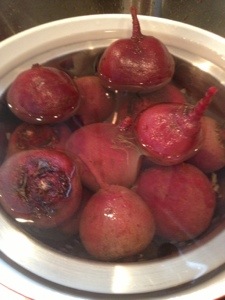 Dunking the beets in cold water.

Due to popular demand, we sliced them all (instead of doing some in a chunkier style…).

We added a malt vinegar and water mixture after we’d added a spoonful of pickling spices to each jar of sliced beets.

At this point, the whole house smelled like vinegar and beets and all the windows were fogged up. Lids went on and the jars were gently lowered into a boiling water bath.

Beet juice and sharp knives everywhere! It was about halfway through several batches that I got a phonecall – “There’s a stray horse down at the barn!”

I sprinted down the hill and found a pony with some serious attitude pulling faces at my horses through the fence. She has visited our place before, so I knew where to take her. Leaving T. in charge of the beets, I hiked down the road with pony in tow. Fortunately, farming neighbour Mitchell happened to see me and gave me a ride back so I didn’t miss too much.

After T. left for work, I finished up the last batch. It was one of those situations where I could either have six very full jars or seven not very full jars and I opted for the former. Mistake! You know the part where they say ‘”leave plenty of head room?” There is a good reason for that… Fail to do so and your jar explodes due to all the super hot expanding liquid in the jar. Which is what happened in the last batch. 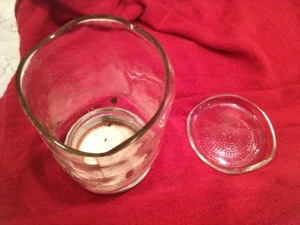 The good news was that only one jar was lost. And, bonus, the bottom blew out very cleanly – no splinters or missing chunks of glass. So, the hogs were happy – they got some fancy beets as a treat!

Not only did the bottom blow out, the whole jar flipped upside down in the water bath.

Fortunately, all the other jars sealed without trouble… 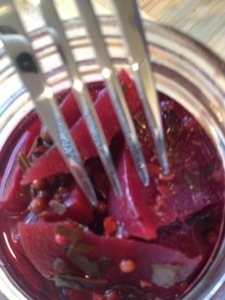 We couldn’t wait the recommended three weeks before testing… so today after everything had cooled, we opened a jar. 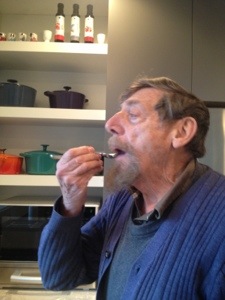 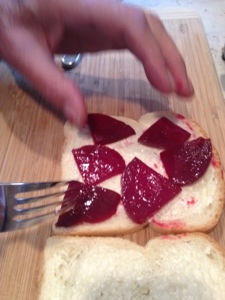 Fortunately (because we have a lot of them!) the beets passed muster and made their way into a cheese and beet sandwich. As the rest of the beets sit in their jars they will absorb more of the vinegar and spice mix so the taste will be stronger, but even in their premature state, they are pretty yummy! Will throw some into the salad tonight!