I is for Ice and Infamy

Today’s post for the A to Z Blogging Challenge will be mostly photos – of ice. Which is definitely a bit strange given I am sitting beside a swimming pool in Hawaii as I write this… But ice has been a bit of a theme back at home this year. I knew there were people who climbed frozen waterfalls, but to be honest, I didn’t really think I’d ever be one of them. And then, I met Fabio, who is obsessed with ice climbing.

I can’t say that I’ve become obsessed with ice climbing in the same way climbing rock has seized me, but I have lost track of how many times I’ve had my breath taken away while in the presence of some icy feature. 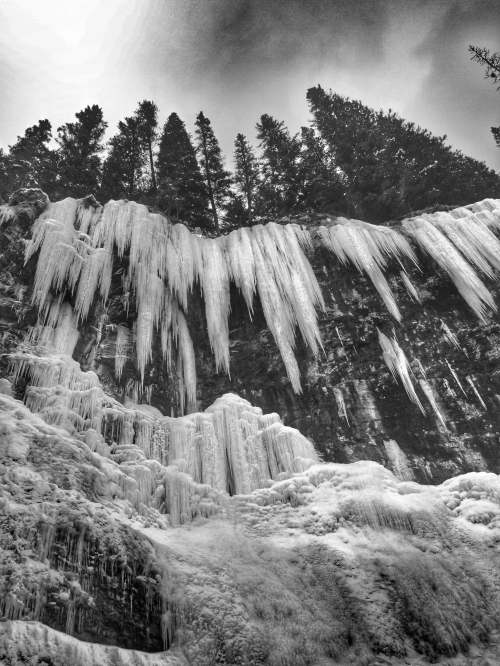 At various points during this winter’s explorations I’ve found myself hanging out in ice caves – either to get out of the wind, wait my turn to climb, belay safely without getting bonked on the head by falling ice or, once, when I decided I wasn’t up to the final, steep pitch and was happier waiting for the others to climb while I snapped a few photos. 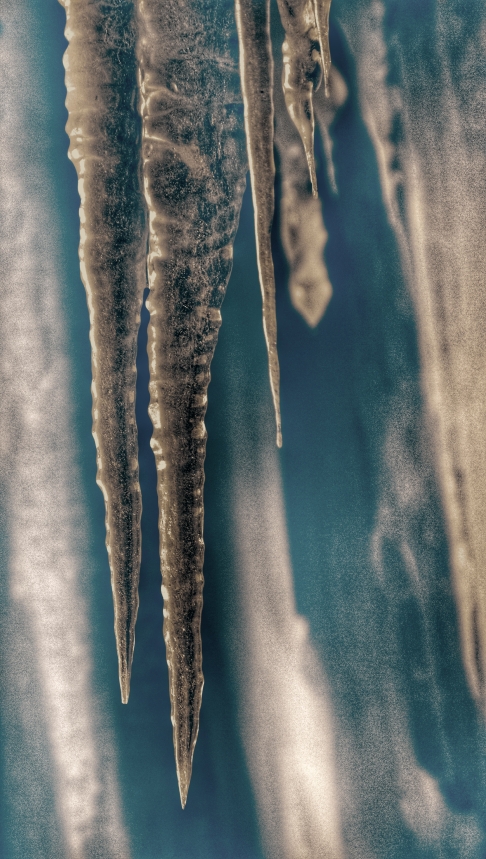 This House of Sky

By turn brutal and delicate, intimidating and fragile, ice is nothing if not unpredictable. From one day to the next it can change and, depending on its mood, can make for a fabulous climbing partner or an obnoxious opponent determined to thwart one’s best efforts to ascend. Softer, wetter conditions make it much easier to sink your ice tools deep, but too warm and things can literally start falling apart beneath you.

Whack at a piece of hard, glassy, blue, extremely cold ice and your tool is just as likely to bounce back at you, barely leaving a scratch on the surface. Hit the rock hard surface at a slight angle and you might dislodge a knife-edged slab of ice capable of decapitating you or your belayer.

Tuck in behind a curtain of ice like this one at Bear Spirit near Banff, Alberta and it can feel like you’ve been transported to a parallel universe… One where ice fairies might emerge from their glassy bedrooms to dust the wintery world outside with a sparkling of frost… 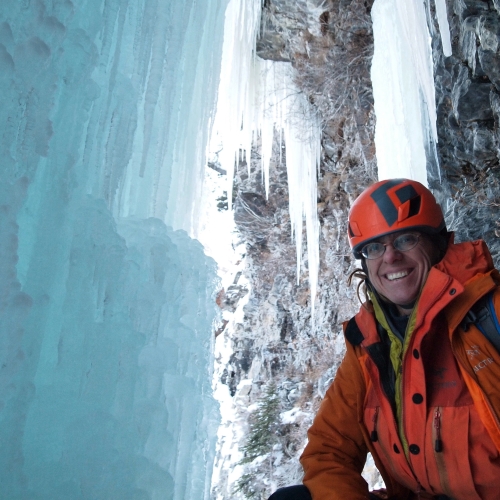 I’ve got my brave game face on here, but I was actually terrified. I was about to step out and around a very steep column of ice at Louise Falls  early in the ice climbing season and very early in my ice climbing career. Though I had serious doubts about my ability to get to the top of this one, once my palpitations subsided, in the end all went well.

Haffner Creek in BC is a place lots of climbers go to practice their ice climbing skills. Here I’ve been sent on a mission meant to improve my footwork. Note that my ice tools are parked down at the bottom and I’m climbing without them. Instead of relying on hooking the tools into the ice and hauling myself up, I can only use my gloved (and increasingly cold) hands for a bit of balance. All the upward movement came from my feet, which is as it should be.

As I write this today I could not be farther away from that magical, icy world of the mountains in winter. Here in Hawaii we visited Pearl Harbour this morning and spent some time in quiet thought at the memorial of the sunken battleship, Arizona. In the museum I was intrigued to see the handwritten edits to one of the world’s most famous speeches delivered by F. D. Roosevelt the day after the Japanese attack on Pearl Harbor.

The word “infamy” was not in the original Pearl Harbor speech.

I’m busily editing three different manuscripts in progress at the moment and they all look a bit like that typed page, full of additions and deletions and new directions and re-thinkings. Not that any will be as significant as The Infamy Speech, but it is reassuring to see that even the most eloquent of writing likely started out looking quite different to its final, polished form.

4 responses to “I is for Ice and Infamy”