E is for Elvis, Ed Viesturs, Everest, and Easy

Me playing around on the cool, textured rock (once a coral reef, I think) at Graceland… that leg on the left might just be a jiggling…

One of the things I’ve found most entertaining over the past year is the way in which climbing routes are named. Take Graceland at Grassi Lakes. Every route on the wall is somehow Elvis-related. Some of the route names include: You Ain’t Nothin’ but a Hang Dog (5.10d), Memphis (5.10d), Elvis Lives (5.10b/c), Heartbreak Hotel (5.10d) and Sunglasses and Sideburns (5.10c). Not that I can see why one piece of rock is more evocative of one song than another, but in the minds of those who put the routes up, there must have been some kind of logic.

Elvis’ name is used in another context at the crags. Having a bad case of Elvis Leg (sometimes known as Sewing Machine Leg) is the rather unnerving leg quiver that develops partway up a climb, the result of fatigue or nerves (or both). Generally, it happens at the worst possible moment, when you are perched high above the ground, one toe wedged onto a thin lip of rock, all the muscles in your leg tense, trying to balance or shift your weight and reach just… over … there… to some teeny weeny bump of a pebble-sized outcrop so you can reach up and over and continue climbing. If the jiggling gets too bad, it can send your whole body into sympathetic convulsions, a state of being not conducive to reaching the top. Elvis Leg often precedes a fall – wise belayers get ready to take action when the shaking begins…

The climb called Naked Teenage Girls at Barrier Mountain is named sort of sensibly, I guess. That particular wall is very smooth – no lumps and bumps to grab onto. Assholes of August at Skaha Bluffs is a nice, long crack climb – maybe the first ascenders were behaving badly in the summertime? [Editorial aside: It’s high time more women started putting up routes – surely we could come up with better names?]

Meathooks at Grassi Lakes is logically named as the steep, overhanging rock means you wind up hanging there a lot. When we were there last week there were bodies suspended everywhere (mine included… because of the overhanging angle I was suspended so far away from the place I fell off I had to be lowered, the rope twirling me like a top so I could start again from the ground)…

Someone who probably doesn’t suffer from Elvis Leg too often is Ed Viesturs, a guy who is pretty famous in the climbing world. He’s the first American (maybe the only one?) to have climbed all 14 of the 8000 meter peaks, all without using supplemental oxygen. He’s a writer and motivational speaker and recently Fabio and I have been listening to the audio book version of his book, No Shortcuts to the Top.

It’s a fascinating read that talks about his quest to reach the top of all the world’s highest mountains, perfect for our drives back and forth to our own mini expeditions. Ed was part of the IMAX film team that was shooting on Everest during the terrible 1996 season that claimed eight lives. That disaster became the focus of the book Into Thin Air by John Krakauer (another great read). Ed has climbed Everest seven times, which is why he made it onto E-Day.

And, finally, I wanted to say something about days when things go a little better than other days in the life of a geriatric climber. I’m in my fifties and sometimes it’s really discouraging to see all these youngsters in their 20s who are climbing hard and making it look easy, especially when I’m having a particularly off day. My list of creaky bits is getting long – I’ve talked about my recovering elbow more than often enough, but that’s just the first of a number of annoying failing  body parts that vie for my attention. There’s something wrong with my left shoulder (made worse in the fall) and which needs to be properly dealt with at some point. My physio’s theory is a torn rotator cuff, but to be honest, I’ve been leery about getting a scan and then learning I am going to need surgical intervention. Some things are better left unsaid. So, I tape up my shoulder and strap on my brace and take some Tylenol and get on with the day. Nights are for icing and, so far at least, even though I look like my arm is being held together by tape and velcro, it’s functioning well enough.

Long approaches are really hard on my arthritic hip, the one that was injured many moons ago when I fell off a bridge with my horse (long story, and nothing in there starts with the letter E, except maybe EEEEEk!). I use a ski pole and try not to be too hard on myself when I’m slow on uneven terrain, especially when carrying a pack. I really feel my age on days when the big toe joint on the opposite foot starts to act up. That’s pretty much seized up from arthritis and can be incredibly painful on long hikes. I’ve found that cranking my boots (when ice climbing), approach shoes (for hiking) and climbing shoes as tight as humanly possible basically immobilizes the joint, which makes things mostly tolerable. Various joints in my fingers and thumbs are starting to ache – in part because I’m climbing some stuff that requires hard pinching, crimping, and pulling, but in part because old injuries are coming back to haunt me with the onset of arthritis in all those joints, too… (this is the moment when, if you happen to have one, you send me your best suggestions for dealing with arthritis!)

Listing the aches and pains has taken me a bit off course, but the point is, some days it’s easy to get discouraged, to question what on earth I think I’m doing heading for the crags day after day to climb alongside mere children!! And then, there’s a day like yesterday at Barrier where I tackled several things that I have, in past visits, found difficult (or impossible) but which were, yesterday at least, EASY!! First, I LED a route – not a hard route – but still, a lead (the 5.7 everyone uses as a warmup). Nevertheless, I wasn’t stressed (too much) and made it all the way up pretty smoothly. So, progress. After that, I climbed several of the slightly harder routes, all without any trouble at all. Feeling thoroughly warmed up, I decided to challenge myself and climb my hardest-to-date outdoors route (a 5.11b called In Us, Under Us which even Fabio admitted was ‘stiff’) and would likely have climbed it clean except I missed a very obvious hold (just didn’t see it – it was right in front of my face – here, I blame my trifocals because, hey, I was probably the only person climbing yesterday who was wearing trifocals…) andI  popped off when I made an ambitious move (and almost made it!) to the next hold without using the previous (unseen) hold. Keep in mind this was on a steep, pretty blank, balanc-y face where I was trying to transition around to a corner, also without a whole lot of holds to work with… I actually had managed to grab the upper hold but just as I was about to grip and get settled, my foot (which I had managed to get nice and high with a heel hook!) slipped and I didn’t have quite enough grip on the upper hold and fell. I was a bit rattled at that point and it took a couple of tries to repeat the move (and a couple more falls) before Fabio called up, “Why don’t you use that hold right in front of your face?” At which point I saw the hold in front of my face, which was exactly where it needed to be, and I easily (EASILY!) made the next move and finished the rest of the climb without much trouble.

I tell you, that felt GREAT! I’ve been feeling a bit stuck recently, like I wasn’t making a whole lot of forward progress, but getting up to the top of that one was very encouraging. So much so I decided to have another go at the 5.10c crack climb (End Dance) that had given me such trouble on a previous visit. Flailing, I think was the word Fabio used to describe my efforts on my first attempt. Yesterday, float might have been a better word. It was so strange! It certainly helped that I had climbed it before (and done it so badly – I knew exactly what I didn’t want to do). It also helped that friend and roomie Paul was there to give me some advice as I climbed (good beta, Paul!). And, it helped that I had just climbed something I didn’t actually believe I could climb. The last time I tackled End Dance, I thought I could power up the crack by hauling myself up. This time, I used my feet, used my head, stayed relaxed and, yes, E is for Effortless!

This may all sound a bit bragalicious, but I feel quite confident that failure at the crag is just around the corner. Climbing is like that. The next time I attempt that crack climb it’s just as likely I’ll be back in flailing mode. And that’s ok. In the balance, the good moments outweigh the bad and that’s what keeps me coming back. 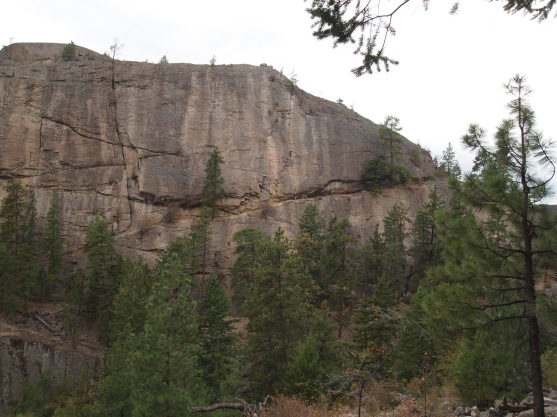 Assholes of August is the crack on the right – there’s a dude on there, if you zoom in…

Bring on Assholes of August! I’m going to lead that puppy, you mark my words!!