B is for Bouldering, Broken, Barbara, Brace and Best

Bouldering: the art of hauling oneself onto large rocks – imagine hunks of stone the size of a school bus or a garage – using only fingers and toes (and heels, if you know how to do a heel hook) 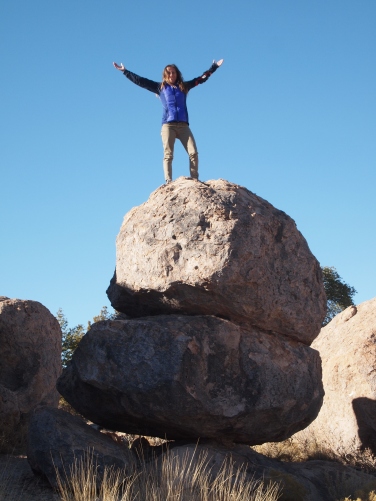 Bouldering indoors: the art of simulating hauling oneself onto large rocks inside a climbing gym using moulded plastic holds bolted to the walls – using only fingers and toes (and heels, if you know how to do a heel hook) 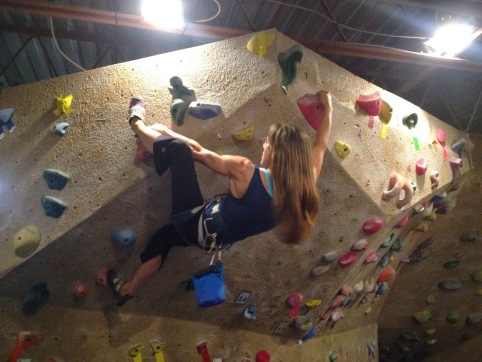 Bouldering indoors badly: the dark art of hauling oneself up a wall using fake holds, leaping for the last hold up under the roof/overhang/tunnel entrance of the climbing gym (10′ off the ground), missing, and falling sideways, then crashing onto the ground

Aftermath of bad bouldering: If one lands on the heel of one’s hand (nothing to do with heel hooking), the full force of one’s body slamming onto your arm results in a double-dislocated elbow as both bones in the forearm shoot past their usual home in the elbow joint. This is not a pleasant feeling. As a matter of fact, this is an experience far worse than childbirth. A pain that borders on… I can’t even come up with a comparison as I had always been led to believe that childbirth (no stroll in the pleasure park) was about as bad as it gets. Trust me on this one. Blowing your elbow apart beats birthing a big baby by a billion miles (how’s that for using up my letter b’s?)

Fact: If the ER doctor gives you too much Propofol and not quite enough Ketamine (or the other way around – what do I know? I was supposed to be unconscious…) prior to jarring said wayward bones back into position, then one is lucid enough to believe one is dead and to remember much of what happens next quite clearly. And, really – I don’t think I was so far off in my conclusion that I had passed over to the other side. I even told the doctor that he should be careful not to kill me because wasn’t it Propofol that finished off Michael Jackson? Some rather spectacular hallucinations further supported my ‘I guess I’m shuffling off this mortal coil’ theory. When the room fills with white light and you have the sensation you are climbing out of your body and up the face of El Capitan in Yosemite – free of ropes, free of any obligation to return, climbing like a ballet dancer, crawling upwards toward oblivion, quite aware that this (climbing into the light with a grace even more graceful than Alex Honnold** demonstrates on his best days) could mean only one thing – I was dying – or already dead. I had the brief sensation of my back pressing flat against the emergency room ceiling and then heard the sound of someone screaming somewhere at the end of a very long corridor. I later learned that the screamer was me as the doctor snapped everything back into place. The noise was loud enough that anyone who was ambulatory fled the waiting room of the emergency department. 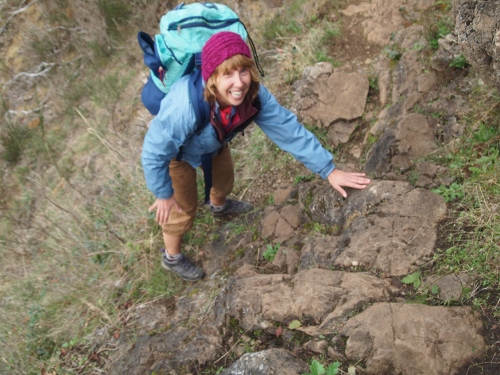 Which brings me to Barbara, climbing partner, good friend, and there with me at the gym when I took my spectacular fall. Fortunately, Barabara’s name starts with a B so I can talk about her here. Also fortunately, in her day job she is an ER nurse, so she remained cool, calm, and collected while she scraped me off the mat at the gym and cajoled me into the back of our mutual friend’s car (thanks, Larissa – you were a trooper). Even Barbara, though, couldn’t handle the cries of desperate agony emanating from yours truly and raced away to take refuge out of earshot.

All this happened not quite a year ago – late on a Friday night. I strapped my useless arm to my body and started climbing again on Monday using the other arm (I blogged about that here …) and then started on a course of physiotherapy and quite a bit of whining and complaining. Eventually, I was fitted for a skookum custom brace, which I still have to wear every time I climb (or make bread or move a box or carry groceries). Things do not look good in terms of avoiding surgery, but the brace has proven to be fantastic in terms of keeping me functional for the foreseeable future. Slowly but surely my muscles have been rebuilding in the damaged arm so I’m mostly able to climb whatever I want to climb (yes, yes – as long as I’m not leading). The nerve damage that temporarily had my left thumb forgetting how to exert pressure on anything is more or less healed (that took about eight months) so now I can’t blame my fumbling clipping of the climbing rope into the draws on anything other than total lack of coordination. 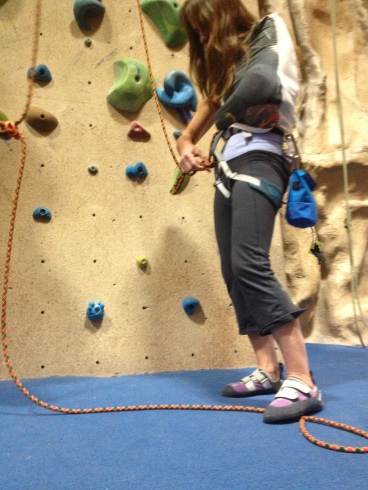 Tying the climbing rope to my harness with one hand (my non-dominant hand no less!!) on that first night back at the gym was incredibly awkward. This isn’t a great photo, but you can see the bulgy padding (an oven glove) protecting the injured elbow, which was stuffed into a sling and then covered with a tight T-shirt so there was no risk of getting hung up on the sling or bumping the arm in case of a fall.

As it turns out, having a serious injury in an arm was about the best thing that could have happened to me when it comes to improving my technique. Because I’m pretty strong and don’t weigh much, I’m blessed with a strength-to-weight ratio that is really helpful when it comes to climbing. The temptation is to haul yourself up through tough spots, which can work ok but isn’t efficient or particularly effective. Technique begins with the feet – it’s way easier to lift your body weight using the big muscles of your legs than it is to do a series of chin-ups all the way to the top of the cliff. Placing your feet well, finding your balance, trusting that the rubbery souls of your climbing shoes are not going to slip off that ludicrously tiny pimple of a hold makes it sooooooo much easier to keep going than using brute force. Even if a wall is steep, if it doesn’t have any bulging holds on it to grab onto and pull, if there are lips and cracks and bumps big enough to wedge your toes onto it’s amazing what you can climb even when the wall looks blank.

Sometimes there just isn’t much to grab hold of. Note the awesome red brace holding my arm together. It would also work well as a face-smashing device should I ever get mugged. Bam!

Blank. Bam! Good words to end on, given this is B for Boy oh Boy No More Bouldering for Me Day.

**Yes, I know Alex was the poster boy on A is for Ace Climbers Day – what can I say, I have a bit of a crush…

7 responses to “B is for Bouldering, Broken, Barbara, Brace and Best”