I’m living several parallel lives at the moment. In one life, I am climbing as often as possible, making the transition from ice back to rock as the seasons change. At the climbing gym I’m pushing myself to climb harder stuff so I’m good and ready for whatever the summer season might bring. Down at the playground at the end of the block we are doing some practice crevasse rescue sessions, which involve copious quantities of

Crevasse rescue practice down at the local playground…

Later this spring there is talk of a trip to the Bugaboos where, I hope, I won’t have to self arrest or haul an injured climber out of danger using my newfound knowledge of Garda hitches and how best to use a pulley strategically placed on a climbing rope to allow little me to haul an incapacitated climber to safety.

In another stream of my current existence, I am writing up a storm, working on several projects that range from a picture book for very young children to a memoir about the nature of personality and my mother’s demise as the result of Pick’s Disease (a bizarre early onset dementia), a handbook for young activists, and a couple of other non-fiction titles for kids. Those worlds (writing/climbing) overlap in a novel for reluctant teen readers about three teens who find themselves in trouble when a day in the mountains goes sideways (coming out next year with Orca Book Publishers).

There’s another life, as well -the one that involves sailing. Preparations are already underway for our trip next year – and that strand of my existence will likely get quite a lot of airplay here over the coming months. Already I am plotting practice courses (using dividers and a chart plotter – on paper charts, just like the old days) and testing recipes that will sustain us on long crossings (Lynn Pardey’s Cabbage Salad from her great book The Care and Feeding of Sailing Crew was on last night’s menu – it gets a pass…)

Back on the climbing side, we are planning a trip to Skaha at the beginning of May, a propos as we met there at the beginning of May last year. The most memorable moment for me from that trip was standing (in a complete panic) at the base of a climb called The Raven and the Bear. I don’t think I ever blogged about what happened, so in the interest of bringing everyone up to date, here goes.

Last year, after I returned from my glorious sailing trip to the BVI (seriously, I can’t remember a more sustained stretch of fun, fun, fun than during those 6 weeks on the water with my family… except for the heaving, puking crossing-from-hell between Virgin Gorda in the British Virgin Islands and Saba in the Dutch West Indies… but that will have to be the subject of a different blog post…). Anyway, I had to rush back to embark on two back-to-back book tours that took me all over the province of British Columbia, visiting schools and libraries and bookstores, speaking about my books, presenting at the Red Cedar Gala in Vancouver (I was lucky enough to have a book nominated for a Red Cedar Award), and leading writing workshops in various communities along the way. The itinerary was intense – I was on the road for a bit more than three weeks and my only real day off was the day after my birthday, on May 3. Knowing there was a good rock climbing area near Penticton, I had packed my harness and rock shoes and driven there on the afternoon of my birthday after a presentation in another town.

I hiked up to the bluffs and introduced myself to half a dozen parties of climbers who were hauling each other up and down the area cliffs. In each case I asked if they might be willing to let me climb with them the next day, my precious day off. And, one after the other, the groups rebuffed my advances. They were evenly paired already and couldn’t accommodate an extra person. They were from out of town (half of Alberta seemed to be climbing there!) and weren’t going to be around the next day. A couple of groups were participating in climbing courses. One guide, when I asked if he knew of anyone local I could hire the next day suggested I return six weeks hence to join his next outing. I explained I had the next day available and that was it.  He said that was too bad and that every available guide in town was working for him, so I was completely out of luck. To say I was disheartened is an understatement! All those climbers and all that lovely rock and it really looked like I wasn’t going to be able to find anyone to take pity on me and let me join them. I later learned that this kind of strange, forward behaviour is just not done – it’s pretty much unheard of for someone to walk up to you at a cliff and ask to join the fun. Fortunately, I had no idea or things might have turned out quite differently…

So anyway, there I was feeling well and truly rejected, heading back to the parking lot thinking I would have to go on a hike all by my lonely self the next day when I came across a group of three climbers. I was about to walk past them because, you know, even a writer can handle only so many rejections in a single day, but then the guy at the bottom of the cliff (who was belaying his friend) called out, “Hey! How’s your day going?” His huge smile and friendly greeting made me think I should have one more try and when I explained I was looking for someone to climb with the next day he said, “Come climb with us!”

Which is how I found myself in the parking lot at 9 am the next morning, nervous and excited and not having any idea what I was getting myself into. When Fabio asked me about my climbing experience I said I was climbing grades 5.8 and 5.9 in the gym and had not been rock climbing since I was ten. He mis-heard me and thought I hadn’t been climbing outside for ten years – and, apparently, he found gym route grades to be irrelevant because he said the plan was to warm up on a route graded 10a. Which, even if you know nothing about climbing grades, is clearly harder than anything I’d ever tackled. As for basically having no rock climbing experience, well… I suppose things could have gone very sideways. Here’s what was going on in my head as I stood at the bottom of what appeared to me to be a monstrous cliff…

“Oh. My. God. What am I doing here? What do you think you’re doing here? You wanted to go rock climbing – there’s a rock. Now shut up and watch how the others are climbing it.” 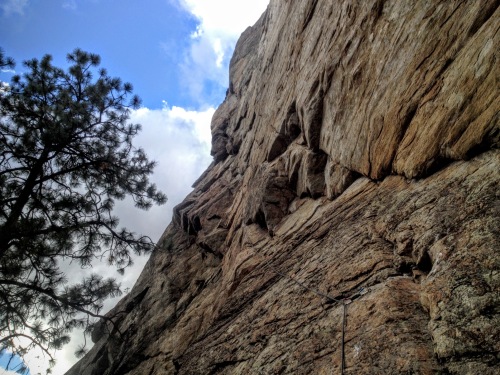 The plus side of being third in line to climb is I had a chance to observe and try to quickly learn what I was supposed to do. The down side of being third in line was I had a long time to develop a pretty healthy state of panic before setting off. Such a state of panic, in fact, that I was convinced I was going to spring a leak and that I would go down in climbing history as “that woman who peed on her belayer…”

The internal conversation continued: “You have nothing to prove! Walk away! Walk away! But these people seem really nice! That guy Fabio seems really nice… and Fabio is up there at the top of the cliff and if you ever want to see him again you pretty well need to climb up…”

So, I started to climb. Legs quivering, heart thumping, mouth dry, convinced I was going to die, up I went. My technique was terrible. At some point Fabio called down, “How’s it going down there?” and I answered, “I’m finding this hugely entertaining!” Which I was, in a horror movie kind of way. I more or less willed myself all the way up to the top, finishing the climb by dragging myself up and over the top edge. This unstylish arrival was greeted with big grins and a hearty, “Well done! Nice belly flop!” Not that I cared. I was exhilarated to have made it all the way up. I couldn’t stop smiling.

That climb marked the first of hundreds of climbs over the past year, many of which I’ve done with Fabio.  Some have been short and easy, others long and hard. There have been epic multi-pitches on big mountains, short, technical conundrums at various climbing gyms, frozen waterfalls, giant boulders, steep overhangs, granite, sandstone, limestone, basalt – climbs in Nevada, Texas, New Mexico, Arizona, BC, and Alberta… The more I do, the more I want to do – and the thought of sailing next year from one climbing destination to another seems like some kind of extraordinary bliss of the type that only happens in wild fantasies!

When I think how close I came to walking right past that last group of climbers at Skaha I shudder. I have no idea what might have happened if I had not tackled The Raven and the Bear. If I had continued to the car park I wouldn’t be sitting beside Fabio right now, taking breaks from writing this blog to chat about whether we should go sailing in Oman or how much leashes will cost for ice tools (I’m worried about dropping a tool on an ice climb and finding myself well and truly stranded – though, not in Oman, obviously). I look back on that day and my ludicrous decision to jump in and try something waaaaaaaay out of my comfort zone and can’t help but grin and shake my head. Having hauled my quivering self up that climb and into a new relationship and a whole new life of climbing and adventure I feel like my limits suddenly expanded another notch. In that moment of belly flopping over the edge I landed in a parallel dimension I hadn’t even suspected existed. Uncharted waters. Untested recipes. Unclimbed mountains. Uncrossed oceans. Exciting times, indeed…