Too Cool to be a School 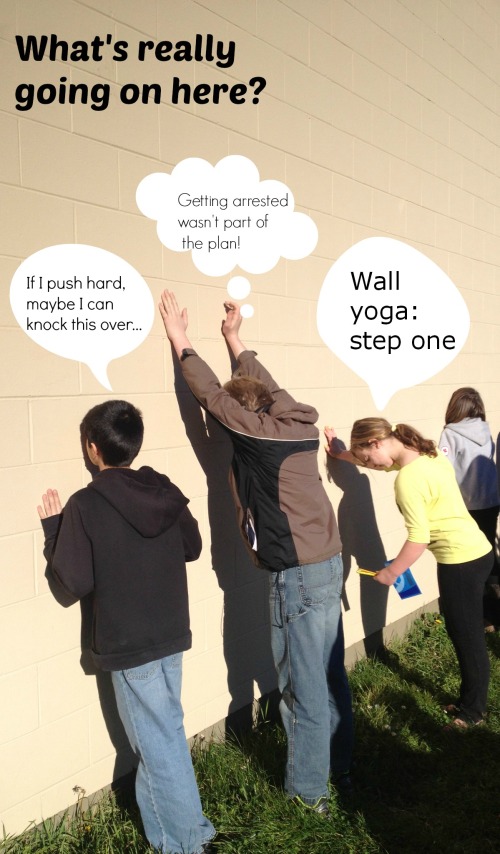 A few weeks ago I started working on a lengthy project with some students at Shoreline Middle School. Kids from grades 6, 7, and 8 are working together to create a book that highlights all the cool, green initiatives going on at their school. It turns out, there is so much going on we might need to do a whole series of books! We certainly have our work cut out for us as we navigate all the usual steps taken to get from concept (“Let’s write a book about our school!”) to the day of the official book launch sometime in late May or early June when the kids will get to hold copies in their hot little hands.

If I were to try to describe everything that’s going on at the school, I would wind up with a book and not a blog post, so I thought I’d just mention a couple of initiatives that could be implemented just about anywhere.

In the photo above the kids are not being arrested or doing some sort of push-ups against the wall. We went on a walkabout together in our early information-gathering stage of the project and the school principal stopped us in front of this wall. A little farther along, closer to the doors, a couple of raised beds contain herbs used in the school’s soup and salad bar.

As we stood there looking at the wall, the principal asked what direction the wall was facing. Several kids knew it was a south-facing wall (I was impressed because, being directionally challenged, I don’t think I could have told you which way any of the walls attached to any of the schools I attended were oriented). Immediately, a lively discussion followed about why south facing walls are great as passive solar heaters and how you can plant heat-loving things (like herbs) along such a wall to extend the growing season.

What was also cool was the way that wall acted like a kid magnet. No sooner had someone said it was likely to be warm than the whole class surged forward and touched, leaned against, and pressed cheeks and foreheads to the building. When the principal commented that there was discussion afoot about planting peach trees along the wall, well, there weren’t too many nay-sayers in the group!

And so it went as we made our way around the school grounds inspecting the vegetable garden complete with hanging woolly pockets full of strawberry plants (sleeping, but still alive), the back forest, and the school field.

I had a bit of a shock when I glanced out the window and saw a couple of these coyotes out on the field! Turns out they are fakes, moved around each day in order to scare off the Canada Geese. They seem to be doing the trick because we didn’t see a single goose on school property all afternoon. I have the feeling that one way or another these guys will be featured in the book!

It was fascinating to see how all the earthy stuff (composting, rain barrels, growing vegetables, a camas bulb planting project, eradication of invasive species, etc.) was being recorded by kids taking photos with Iphones and digital cameras and making notes on their Ipads and other digital devices. I have to say I was impressed that by and large the digital tools were used to get the job done (collect lots of photos of our fact-finding mission) rather than send endless texts or watch cute cat videos. Can’t wait to see how things progress over the next few months! I’ll try to remember to post updates every week or so until the project is finished…

6 responses to “Too Cool to be a School”