Yesterday was a truly oddball day. Started out earlier than usual because I had to get my morning feed/water/turnout jobs done so I could zip back to the house and be showered and changed before – get ready for it – the makeup artist arrived! Yeah. I know. Lifetime, this has never happened to me.

Circumstances? I blame my daughter who, as co-author for the new book, took it upon herself to deal with the author photos. My last one was taken… err, a very long time ago. And, we needed one together for the new/co-authored book. And unlike my earlier efforts which involved a friend or family member snapping a few shots, she was determined to do this one properly. Hence, a makeup artist! Gads. Dani was almost done when I rushed upstairs, hair still dripping wet and quite out of breath so I could be dealt with. I am not someone who believes in makeup. Period. Except perhaps on the occasion of my daughter’s wedding in which case, I know it is her day and I wouldn’t spoil it for the sake of my philosophical position on the cosmetics industry, artificial standards of women’s beauty, blah blah blah. The joint author photo fell into a bit of a grey area – she was going all out and, really, did I have to be the grumpy frump beside her?

I guess I’m not that grumpy yet (give me another few years – I sense some serious crotchety-ness in my future) because I agreed to take part – as long as I could take along the rooster.

This was a first, apparently – the photographer was – um, intrigued. And, there was a logical reason for this move on my part. I can’t imagine getting organized enough to actually get a set of photos done myself (see above note re. friends and family members and last minute efforts approximately once a quarter century), so I figured if I was going to have clean clothes on, was freshly showered, AND was wearing, you know – that stuff on my face, then I might as well get a few extra shots taken that I could use for my school presentation materials, the website, etc. So, we took some shots of the two authors together, a couple of me alone (I might write another book or two before crotchety takes over completely and I hang up my keyboard), and then a series with Wimpy the Magnificent. I tell you, that rooster is worth his weight in fluffy feathers! He was, as he always is, so calm and mellow – we took a few shots, no problem. 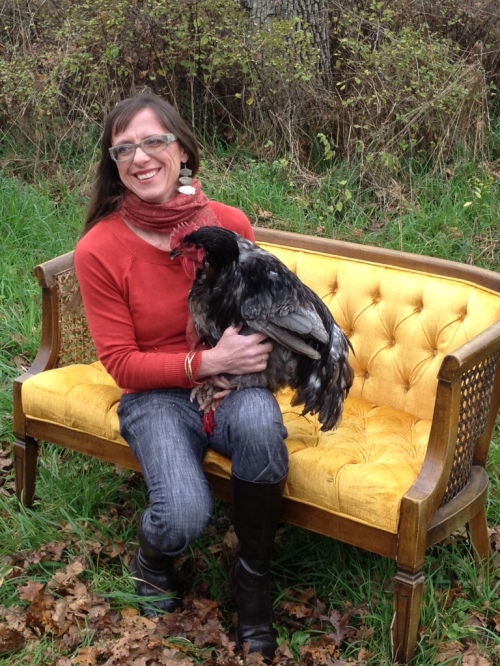 Dani snapped this while Wimpy and I were making eyes at the official photographer.

This photo shoot, mind you, was shoe-horned into a somewhat over-busy day. After the makeup, Dani and I rushed out to grab a load of hay, go to the bank, zoom back to the house to first capture the rooster and then get changed into our photo duds… Zipped to the venue – completed the entire shoot in record time, jumped back in the car, released the rooster at home – I pulled on farm clothes, did an early afternoon feed and scrubbed my rubber boots in the laundry sink. Because, this afternoon was the sheep nutrition seminar out at Parry Bay Sheep Farm in Metchosin – to which I wound up being terribly late due to a mistaken pin on the virtual map in my phone, a lack of service on the back roads I was tearing up and down – and my terrible bad luck in asking exactly the wrong people where the farm was [four out of four were out-of-towners… ]

I only managed to catch a bit about the relative protein percentages of different types of forage, some stuff about alternating grazing and haying, and how the nutritional value of the grass changes over the course of the year before there was a short break followed by a field trip (literally) to check out the electric fencing system on the farm. So frustrating that I had to leave before the tour! Did manage to become a member of the Inter Island Sheep Breeders Association, connect with a few other farm friends, and pick up a couple of sheep magazines before I had to drive back to my farm to beat the dusk and put the birds in. I was a bit surprised that the people I knew recognized me (note there was no time in there to remove all that makeup…)

All of this was followed by a marathon session of dog treat production. In the interests of using every part of our hogs I have been experimenting with making all natural dried pork dog treats.

Dried but not yet packaged… many more batches to come.

Crispy, crunchy, and yummilicious! (at least, that’s what the dogs tell me). So far, the feedback has been great. We sold them at the farm stand and the markets this summer and are getting another batch ready for the North Doug Craft Fair next weekend. Stop by, if you happen to be in the neighbourhood.

This entry was posted in Uncategorized. Bookmark the permalink.