And so another fitful night passes in the truck and still no piglets. This waiting around reminds me of my mare’s gestation. Horses are notorious for being flexible in their due dates and, apparently, though nature more or less decides what day the foal will arrive, the mare can control the hour. 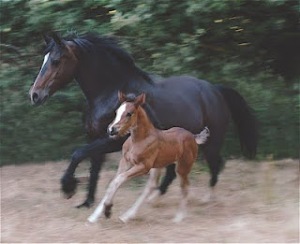 Given this was our first foal (come to think of it, our first birth) on the farm, we wanted to be well prepared. We built a new foaling shed and fenced a new paddock so mare and foal could have some privacy. I readied a garden lounge chair, sleeping bag, and flashlight. We took Bonny’s temperature twice a day and dutifully kept a chart, watching for the telltale temperature drop that would indicate the imminent arrival of the foal. Dad and I went on a now legendary shopping expedition to the drug store to beef up our equine medical kit. The list of purchases was a bizarre one – everything from balls of string to latex gloves to baby bottles to half a dozen giant tubes of personal lubricant. I cannot imagine what the other shoppers or the sales clerk were imagining when they saw the two of us and this unlikely assortment of goodies. We fondled Bonny’s udder for days and when it seemed she was about to pop, I started camping. 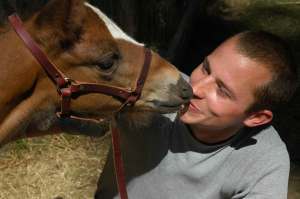 Brio has always been quite the character. Here she is smooching with her farrier, Mitch.

Bonny was always a roller and even though she was hugely pregnant at this point, this did not stop her for indulging in one of her favourite activities. Each time she rolled that first night I slept in the lawn chair (it seemed like six hundred times, but was probably more like every hour) I leaped out of the sleeping bag convinced she was in labour or colicking or something dire… Nope. Just rolling in the grass, snacking a bit while she was down there, heaving herself to her feet, looking curiously at me and my flashlight.

Another night passed and another and another. TWO WEEKS passed and still no foal!! By this time, Bonny was the size of an elephant and I was exhausted. She was still rolling around on a regular basis (though by this point she couldn’t get all the way over any more and had to roll on one side, lumber to her feet, turn over, and roll on the other side), her temperature was dipping and rising, her udder was the size of a cow’s, and it didn’t seem possible she could hang on to that foal any longer.

Conventional wisdom says that mares are most likely to foal in the wee hours of the morning, so I wasn’t so concerned when I left Dad on mare watch while I went off to do a short shift at the bookstore where I worked at the time, I had no sooner arrived late in the afternoon when Dad called the store in a panic. “What do I do? It’s happening!”

There were strangled cries from the other end of the line, grunting and then Dad came back and shouted into the phone, “It’s here! It just plopped out on the grass! It’s trying to stand up! Oh no!”

Then there were fumbling sounds, more grunting and a bit of swearing, and Dad came back on the line, panting – “It’s trying to stand up but it’s going to fall on the electric fence!! Come back! Drive fast! I’m holding it up!”

The line went dead and I sprinted out of the store and raced for home. That was the longest 20 minutes of my life and by the time I got back home, it was all over. The cutest little foal in the world was standing up in the wobbly way of foals. The vet was there, scratching the filly’s backside. Bonny was completely unperturbed. Within another half an hour Con Brio was nursing and an hour after that was cantering around the field before collapsing in the grass for a short nap.

I could not believe I missed the big event after my lengthy stakeout!

Brio’s most recent lesson in being a horse… here, being introduced to the spike harrow.

This entry was posted in Blog, Horses, Uncategorized and tagged #atozchallenge, a to z challenge, foaling, horse farming, horses. Bookmark the permalink.

7 responses to “O is for Oh, Oh Ornery Olivia”