How I Know My Neighbours Rock! 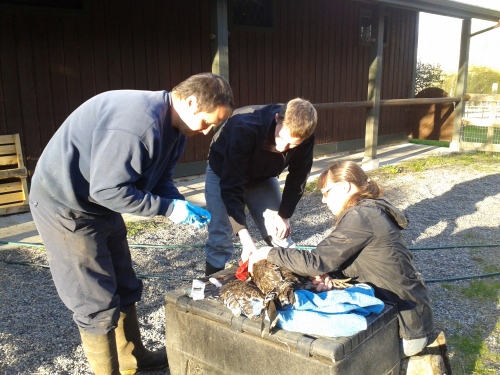 When your turkey gets nailed by a passing eagle, you discover who your friends are…

With the good weather, the grass is starting to grow again, so I’ve been letting the turkeys out of their smaller pen to roam and graze in the strip of grass between me and my neighbor’s place immediately to the north. Things have been going well over the past few weeks as the turkeys have settled into their new routine quite happily. The boys are in full display mode and the girls flirty and happy to accept the Toms’ advances.

She had a front row seat from her place as an eagle swooped down and pinned one of my good-sized hens to the ground. Carol raced outside to come to the hen’s rescue and despite yelling and waving her arms the eagle was very reluctant to relinquish its tasty lunch! When he finally did move, he didn’t go far and it sounds like it was seriously considering taking Carol on as she scooped up the injured bird and sprinted over to my place.

Fortunately, I was at home and with the assistance of my wonderful German volunteer farm helpers, was able to assess the damage. The skin had been torn off on the hen’s back, but that wound seemed fairly superficial. On her right side, though – a couple of puncture wounds from the eagle’s talons and a big piece of flesh ripped off and hanging on…

All things considered, there was very little blood – and the hen was alert and a bit indignant as I checked her over. She was panting and a bit shocky, but remarkably feisty considering her close brush with death.

I called my other neighbor to the east, the Surgeon’s Wife who caught The Surgeon on his way home from work. He called me right back and stopped in at the local vet’s office to pick up a curved needle and a bit of suture thread on his way home. A few minutes later we had all convened in the Surgeon’s barnyard and made a makeshift operating table on the lid of our feed bin, pulled out into the late afternoon sun so as to take advantage of the light.

Flushing the puncture wounds left by the eagle’s talons…

The Surgeon donned gloves and flushed out the puncture wounds with hydrogen peroxide. SP (our most recent arrival from Germany) covered the bird’s head with a facecloth, and I held her firmly so we could see what we were doing. Before you could say, “Jeez, I have the best neighbours in the world!” the hen was all stitched up and slathered with antiseptic ointment. SP had already prepared a large dog crate with fresh bedding and a clean towel, the recovery ward for our lucky bird.

The Surgeon deftly tying fancy knots using a pair of pliers! We have a pact to stock up on suture supplies… we’ve been talking about it for ages and today was a great example why basic stitching materials are essential to have on hand.

Stitching up the patient…

At least, I hope she will continue to recover. I checked on her an hour ago and she was actually up and walking around, looking steady on her feet, bright and perky in her demeanor. We shall see how she does overnight. If we get lucky and a terrible infection doesn’t set in, she might just survive the ordeal.

Whew! We were both glad when the field surgery was over and done with!

I can’t express how grateful I am to everyone who jumped in to help save the turkey hen. Keep your fingers crossed she will make a full recovery!

8 responses to “How I Know My Neighbours Rock!”