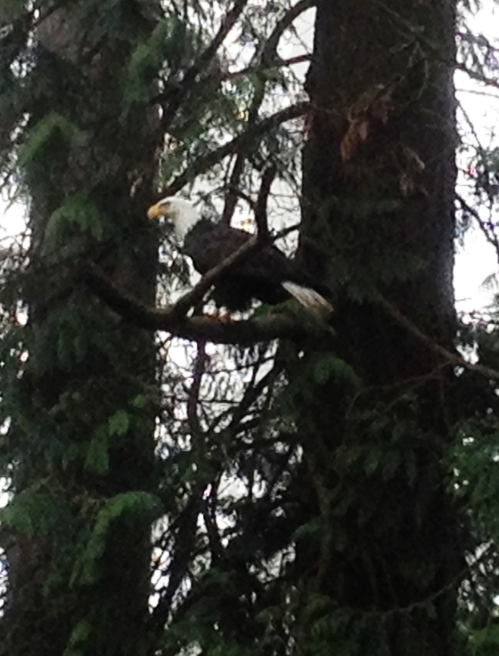 I was at the back of the truck using the tailgate as a handy table on which to hack up soft pumpkins and squash to feed to the hogs, turkeys, ducks, and chickens when the roosters started up their ‘We’re all gonna’ die!!!!’ chorus. The turkeys took up the alarm cry and I turned around to see a bald eagle skimming along knee high in hot pursuit of one of my drakes! They were headed straight up the driveway toward me, the drake intent on escape, the eagle intent on lunch when the drake shot under the truck and the eagle, a bit surprised to see me, swooped up and over me and did a couple of slow, lazy loops just overhead. All of this happened in a few seconds and whether I could have whipped my phone out fast enough to capture the drama is unlikely, but I found myself slapping my empty butt pockets as I realized I had left the phone in the truck cab! The eagle circled overhead a couple more times as I scrambled into the cab, retrieved the phone and watched as the bird landed on a nearby tree branch.

We had a conversation, then – me explaining to the eagle that he was welcome to hunt rabbits and rats but if he wouldn’t mind leaving my birds alone I’d be most grateful. The eagle shrugged himself off the branch, circled once more, and then sailed off with nary a backward glance. It’s odd, actually, that he was going after a drake. The adult muscovy males are nearly the same size as an eagle and would put up a formidable fight. They have huge talons and are generally not bothered too much by predators (the smaller female ducks are another story…).

Time will tell whether the eagle was paying any attention to my pleas for mercy on behalf of the flock.