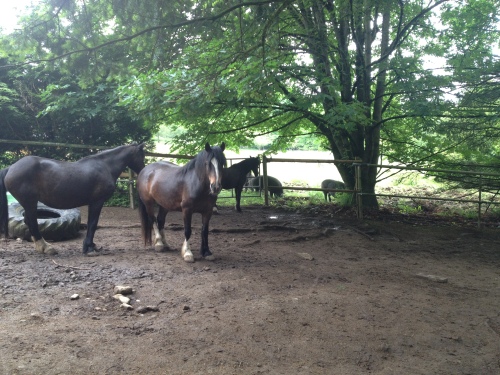 I’ve been backing up photos through google+ (an option now available if you happen to use Picasa) and it struck me how many of the farm photos show groups of animals hanging out and getting along. Ducks and chickens, turkeys and Bantams, ducks and sheep, turkeys and hogs… The cat, Iago, and anybody who will stand still long enough for her to snuggle.

I’ve had horses for many years and one of the things I heard people say with an air of total authority was that horses and pigs do not get along. 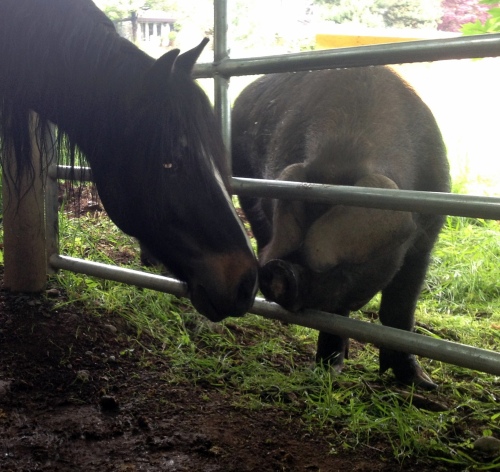 I beg to differ! Ringo in particular is happy to befriend creatures of all stripes – he loves the cat, follows chickens around, and chats through the fence with the hogs (this is our old boar, Philip). When a particularly adventurous group of piglets got out, where did they head? Straight for Ringo! They tugged on his tail and chased each other through and around his feet and he just stood there, head down, curious and gentle.

The oddest bond he has ever formed was with a wild rabbit. The rabbit regularly sought him out and would sprawl in a sunny spot in the horse paddock. Ringo would amble over and proceed to give the rabbit a massage, which the rabbit appeared to thoroughly enjoy. How on earth this peculiar relationship ever began is beyond me. Why would a wild rabbit sit still long enough to allow a HUGE animal like a horse to walk over and give it a back rub that first time? Mysterious, but kind of cool.

Unfortunately, hawk, owl, or eagle likely got the rabbit because after several months of the rabbit hanging out with Ringo it suddenly disappeared.

6 responses to “Hogs and Horses”